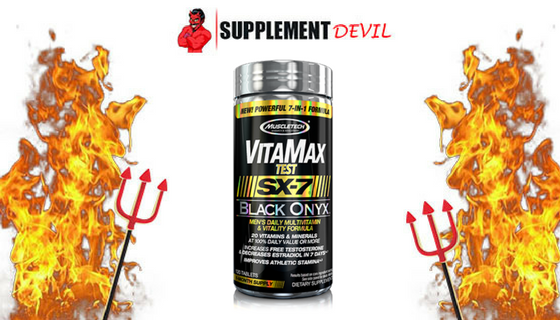 Our Vitamax Test SX-7 Black Onyx Review will be analyzing the T-booster out from a supplement company called MuscleTech. We’ve seen some of their products before. Most of which had been fairly decent, some being a little more so than others.

Of course, there were some bad eggs as well. Every supplement company seems to have some. It’s all a matter of perspective. However, the company really does do their best to provide products that will work for their customers.

A lot of people seem to genuinely enjoy taking their supplements as well. That’s a pretty glowing remark on our end, but they have a decent reputation. Which is partly why this new T-booster of theirs brings up interest.

Of course, whether or not it’s a bad egg or a decent product- remains to be seen. Continue reading to find out.

First look doesn’t seem so bad. There are a couple of flags raised along the way. Some minor sins that don’t necessary require being thrown in the styx for. An example of one of these sins is the long-list of ingredients.

Some people would think that isn’t necessarily a bad thing. However, with most supplements, the more ingredients there are the more underdosed they come.

A couple of good mentionable things. There are four servings per day, which is a good way of keeping your testosterone levels up throughout the day, rather than having to rely on one measly pill. There are no proprietary blends either, another thing to celebrate about.

The Vitamax Test SX-7 Black Onyx is doing great so far. Now, let’s look a little deeper and see if we can’t find some darkness inside of this sheep-exterior.

A popular Pre Workout ingredient, good for muscle pumps. It seems like the Black Onyx is meant to be a mix of both t-booster and pre workout, so we’ll let this pass. The only thing is, there’s not enough of it in the solution for it to be effective.

An ingredient that works well in theory, but it doesn’t supplement very well. It has to do with how it is absorbed through the body. They could have spared this and gotten the proper dose for L-Citrulline instead.

Unfortunately, promising as this ingredient had been, no studies have been able to prove its effectiveness in any way.

Wine, believe it or not, is not just the devil’s drink. It’s also a good way of keeping your blood flow happy. Again, this leans more towards the pre workout side of the Vitamax Test SX-7 Black Onyx.

A very popular nootropic ingredient that is known not only to enhance cognitive functions, but helps reduce effects of fatigue as well. However, side-effects have been seen at too-high doses. Which the Vitamax Test SX-7 Black Onyx unfortunately has.

It’s known for being able to balance the hormones inside of the body. It does so by lowering estrogen. However, too much of the ingredient has also been known to cause gynecomastia.

Boron is the only ingredient inside of the Black Onyx that actually has been known to boost testosterone. However, it’s not as effective as other ingredients they could have used.

For a supplement that comes with four servings a day- for a whole month, this is not badly priced. It sells for around 27.94 US Dollars. That’s fairly cheap for a T-booster supplement.

There are a couple of things that could result in a problem with the Black Onyx:

The Vitamax Test SX-7 Black Onyx is pretty worthless. Especially for something that was meant to be a mixture of a pre workout and t-booster. You’d think they’d get at least one side correct, but nope.

The ingredients chosen were shit, and the dosages even more shit. It might provide mild (barely there) effects, but because all the good ingredients are underdosed- we wouldn’t count on it. There are better stuff out there.

Although the Vitamax Test SX-7 might be able to provide very mild benefits for your pumps and your testosterone levels, we would definitely not count on it.