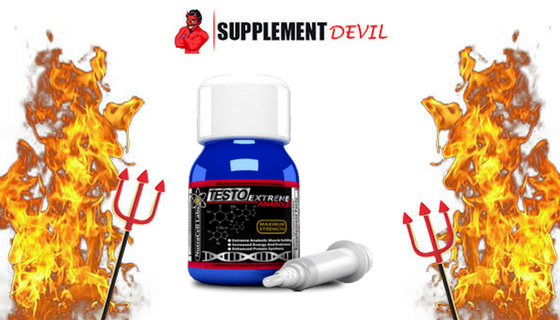 Actually there is. However, rather than a good-kind of special, it is as foreboding as the elevator that brings you straight to hell. So, strap yourselves in folks, looks like we’re looking at a hell-of-a-ride.

The background behind this t-booster supplement, is sketchy at best. The manufacturer goes by the name Nutracell Labs, and produces only two products- the Testo Extreme Anabolic and a Creatine supplement.

Now, the reason this product is suspicious-as-fuck is plentiful: down to the single-page website that is used only to sell said products, to fake testimonials, and the use of stock photos. There’s obviously something going on behind the screen door, and I don’t know about you, but I would rather not be duped into buying a shit product.

How does Testo Extreme Anabolic work?

Okay, so not only is the company shady-as-fuck, but there are other red-flags also being raised. Let’s go through them one by one, because boy-oh-boy, the shit’s about to hit the fan. To start off with, let’s look at the method of consumption.

Are you the type to fear needles? Well, this is a product that is marketed as a substance that is meant to be ‘injected’, however, there is no actual needle. Instead, you’re supposed to pump the liquid into your mouth and let it rest under your tongue before swallowing it.

Of course, as if that wasn’t already bad enough, the Testo Extreme Anabolic also includes proprietary blends. Making it hard to analyze its actual effectiveness- because we have no way of knowing whether or not the ingredients are dosed properly.

The first ingredient we will be looking at, is already pretty bad. It is a something that is extracted from a plant called Turnera Diffusa- which is grown natively in Mexico. There are people who swear by its supposed ability to help boost one’s energy and libido. However, there is no sign of it actually being able to help boost Testosterone in anyway.

It’s one of those shitty marketing tactics that companies like to employ. They would offer up a T-booster that is supposed to help you boost your Testosterone, but in the end, is only likely to make you feel like it’s working by waking up the ‘little devil’ down below.

Much like the previous ingredient. Tribulus Terrestris is an ingredient that has been vaguely connected to aphrodisiac effects. Again, no studies can prove that this is an effective T-booster. It really is, just another libido booster- that doesn’t help improve your chances of gaining muscles and losing weight.

This particular ingredient is not so bad, and is not one that you are likely to see in other Testosterone booster supplements. The reason being, that once again, it doesn’t really help boost your Testosterone in any way- which is what this product promises to do.

This product can be purchased online through the Nutracell official website, which is one that I’m hesitant to link to. Because there really is no money worth paying for this gimmick-of-a-product.

It’s actually pretty okay in price, not so expensive, but far from cheap. If you want one of these sucky little buggers, you’re going to have to cough up around 33.00 US dollars- not including the shipping from the UK.

Side Effects of Testo Extreme Anabolic

Now, because the products are all in proprietary blends, there really is no way of knowing whether or not the ingredients are at-risk for any side-effects. However, if everything we have learned so far about the Testo Extreme Anabolic supplement is to be considered- I would highly suggest avoiding taking this supplement.

Say we turn a blind eye to the shifty company, the fake testimonials, the fact that there is only one serving per day, etc. This is still a shitty fucking Testosterone supplement. It’s one of the worst- if not the worst, supplement I’ve had the pleasure of reviewing thus far.

A lot of the ingredients are inefficient, and even if they were- there is no way of us to know, because each one has been mixed into a proprietary blend.

Cut off my limbs, take my soul, or heck- just throw me in the river of fire. It doesn’t matter what you do to me, there is no way in hell I’m putting that shit into my system, and neither should you.

The Testo Extreme Anabolic is not a testosterone supplement that one can consciously recommend. It provides very little when it comes to boosting your actual testosterone levels and has a shady background that one would probably be safer to avoid.