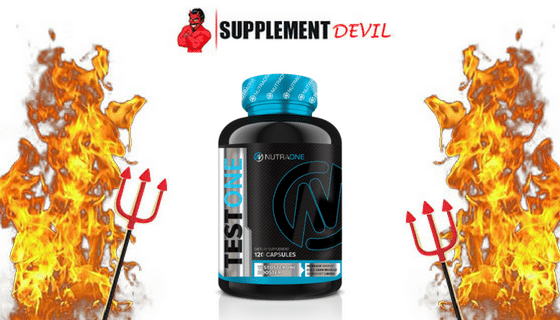 Of course, the first thing we have to do, is start off at the foundation. The product, the TestOne, is produced by a company called Nutraone. This is an oldie company and is one that has a lot of experience when it comes to making and producing fitness supplements.

Unfortunately, that experience doesn’t necessarily equate success. We have seen a couple of their product gain popularity over the years. However, there hasn’t been one singular supplement that ruled over the rest.

Will this t-booster be their bread and butter? We shall see! At the end of our Nutraone TestOne Review, we hope to conclude our analysis with a sound conclusion. Is this something that deserves the Devil’s favor? Read more to find out!

How does the Nutraone TestOne work?

When it comes to picking out a t-booster, it’s important that you keep in mind the basics. For the most part, T-boosters focus on two things. These are testosterone boosting ingredients and libido boosting ingredients. Other times, supplement companies might add a couple of things to aid with that process.

As our Nutraone TestOne Review will tell you, this t-booster is one of the latter! They added anti-estrogen ingredients that are meant to normalize/lower your estrogen levels and allow for better t-boosting production.

If they manage to pull this off, then it would be quite the impressive feat! However, I’m having a hard time internalizing this factor when their whole formula is encased in one of those stupid proprietary blends. This will prevent us from going into detail as to how effective all the ingredients are.

However, that won’t stop us from proceeding with the next part of our review! We’re going to be detailing all of the ingredients inside of this formula that you should watch out for — whether it be because of possible benefits or dangers. 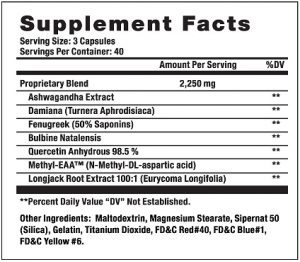 Our first ingredient, right off the bat, is not so impressive. It’s something that we see often enough, but it really is not a testosterone booster ingredient.

It has been shown to have a couple of fat burning benefits, but these are minimal (insignificant enough that we don’t see it in many fat burners.) We’d also have to keep in the problem with the recommended dosage (6000 mg taken throughout the day), when compared to what the TestOne actually has (around 4000 mg.)

Fenugreek is our second ingredient of consequence. This is a common ingredient inside of t-boosters. The research on it is varied when it comes to how it affects people (between different types of people). However, it has been proven to effectively enhance the levels of testosterone in the body.

It does have a recommended dose to be followed (500-600 mg), which we don’t know if the Nutraone TestOne has.

A largely unfounded t-boosting ingredient. We see it often enough that some people would assume that it works. However, this has not been proven (despite the research that has been done.) The most that it has been shown to do, is boost your libido. Which is a nice benefit, but I’d much prefer something stronger (if they were meaning to use it for that purpose.)

Much like longjack, this is a t-boosting ingredient that is largely unfounded. It has been tried and found to be successful in some rat species. However, when applied to human practices, the results had been too insignificant to be counted.

It’s also poses as a libido-booster. Which might be why it is paired up with long jack. However, once again, they could have used a better one. Considering that bulbine has been linked to horrible side-effects (see side-effects section.)

The Nutraone TestOne is more expensive than most of the supplements in the market. It sells for around 42.99 US Dollars per container. This cost is somewhat substantiated by the amount of servings (which is at the maximum 4 capsules throughout the day — 120 capsules per container.)

Side Effects of Nutraone TestOne

Although most of the ingredients inside of this t-booster are harmless. There is one that is cause for some immediate concern:

We’ve reached the end of our Nutraone TestOne Review! It’s time for us to give our honest opinion about what’s going on in this formula. We’ll need to clear up a couple of things too, because this review was all of over the place.

A lot of it was negative, unfortunately. There were some good things. Like the use of Fenugreek and the fact that they had the proper dosage (4 throughout the day.) However, these are discounted by the use of unproven ingredients, the price, the potential side-effects, etc.

Overall, the TestOne left a lot to be desired. It could have been a good supplement, but it focused too much on using what was popular. Rather than doing the research that could have gotten them a perfectly functioning formula.

If you are looking for a t-booster that will work for you 100%, then check out our Top 5 testosterone booster list.

There were a lot of negative things about the Nutraone TestOne. The price, the use of unproven ingredients, and the side-effects being a couple of those things.