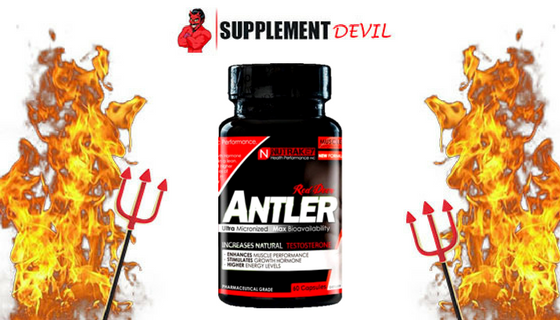 NutraKey Red Deer Antler is a supplement that is designed to boost athletic performance, enhance testosterone and increase energy levels.

This supplement is meant to help increase the levels of growth hormones inside of the body. As well as promote fat loss by increasing metabolism, and enhancing the rate of post workout recovery.

Red Deer Antler is produced by NutraKey, a supplement company based in Longwood, Florida.  It contains deer antler velvet, which is suspected to boost testosterone levels. High testosterone levels result in gains in vigor and strength while minimizing recovery time.

In  our Nutrakey Red Deer Antler review, we will examine the properties of this supplement in detail. This is to determine how it works, its side effects, ingredients and price among other things.

So is the Nutrakey Red deer Antler actually worth something? Or is just another supplement to add into our growing pile of horrible supplements? Well, read on to find out.

How does the Nutrakey Red Deer Antler work?

Deer velvet is a substance that covers the growth cartilage and bone. It then develops into actual deer antlers. The ingredient is naturally grown on the antlers of red deers in New Zealand. This soft covering is used as medicine for different medical conditions, as it is known to contain many nutrients, vitamins and insulin growth factors.

Deer antler velvet is known to boost endurance and strength, improving the way the immune system works. It enhances recovery from illness and counteract the effects of stress. It can also be used at the beginning of winter to prevent infections.

Bodybuilders and athletes claimed to have found that taking supplements containing deer velvet helps increase muscle mass and energy. It also supposed to help improve speed and the quality of recovery after workouts.

Nutrakey Red Deer Antler is generally safe for use. The bodybuilders and athletes who use this supplement experience a wide range of health promoting benefits: including joint relief, physical vigor, better immune function, sexual prowess and increased mental capacity.

Now, as for the supplement itself… well there’s only one ingredient. You read that right. Just one. Although the price is pretty cheap, one ingredient seems a bit overkill for the price they’re asking. 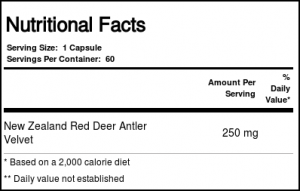 Deer antler velvet has been used in China for more than two thousand years. It is the main ingredient inside of the Nutrakey Red Deer Antler.

Now, despite all the good things that this supplement is meant to do, none of this has actually been proven to work through scientific studies. As such, this main ingredient is a bit of a fail.

This is the only actual ingredient inside of this supplement that we know of. There’s 250 milligrams of this inside of the New Zealand Red Deer Antler Velvet supplement. Now, if you really think about the logistics inside of this. Even if the supplement itself is very cheap, this laziness… when it comes to choosing ingredients is pretty fucking disgusting.

According to the manufacturer, you should take 1 capsule of NutraKey Red Deer Antler with water or another beverage 2 times a day on an empty stomach. You can take the first dose in the morning and the second one an hour before lunch.

The supplement is available at the price of $24.95. This is a relatively affordable price compared to other supplements. However, it is not as cheap when you consider the fact that it contains only one major ingredient.

Deer antler velvet does not have any known adverse side effects. However, it can cause mild side effects like:

The main ingredient used inside of this formula is not that effective, and honestly? Neither are the rest of the ingredients. As such, it really doesn’t have a lot going for it. We already know that the Red Deer Antler itself is unreliable.

This is the best example of a horrible supplement. There’s only one ingredient, chosen for it’s supposed miracle-like effects. However, it doesn’t actually do anything! The company sells it at a cheap price to entice buyers, but in the end?

All they get is a lot of nothing.

The Nutrakey Red Deer Antler deserves to get chucked into the deepest pits of hell. That’s one too many sins, and you can be sure, that we’re going to be more wary of the Nutrakey supplement company from now on.

The NutraKey Red Deer Antler is a HORRIBLE supplement. There's only one ingredient inside of it, an ingredient that hasn't actually been proven to work.