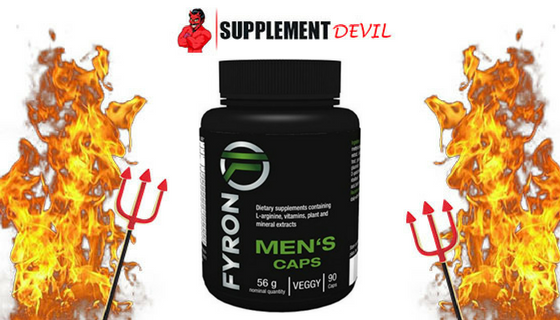 Testorone boosters are a boon to many men who have gone past their prime, or men who see themselves experiencing a decrease in their sexual energy. Our Fyron Mens Testosterone Booster Review, will be analyzing a non-medical treatment that is said to increase sexual libido by increasing testosterone levels.

There is not much known about the people who manufacture the Fyron Mens Testosterone Booster. It is a brand that isn’t as well-established as others that we might have analyzed in the past.

Now, although the company is a bit sketchy, there are a lot of reviews around that stand by the Fyron Mens supposed ability to increase sexual health. Whether or not this is true, remains to be seen.

Read on to find out whether this supplement is hellishly good or hellishly bad.

How does Fyron Mens work?

Testosterone is an important molecule inside of the male body. It helps with the production of sperm and keeps men sexually active. Not only that, but it also helps increase the quality of your workouts by helping you gain muscle mass faster.

It’s a shit deal, but every man goes through a decrease of testosterone. Unfortunately,it is a natural process that some men will see happen faster than others.

So we’ll be able to provide an honest analysis based on the information we have on hand. 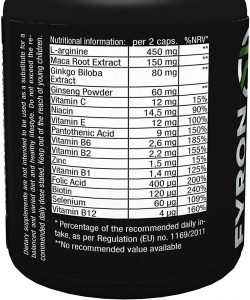 The first ingredient is L-Arginine, something that has proven to increase the efficiency of blood flow in people who are diabetic. It has proven effective in doses of  around 3-6 grams, which the Fyron Mens does not have. However, research has also shown that the supplementation of it is not necessarily effective in healthy individuals.

Maca is more of a libido-boosting ingredient than a t-booster. Research has proven its effectiveness at around 1,500-3,000mg, which (once again) the Fyron Mens does not have.

Ginkgo is more commonly known for its effects on helping ease blood circulation inside of the brain and improving brain function. Which means, that it makes for a better nootropic ingredient than a T-booster one.

Although believed to be a powerful libido-boosting ingredient. Much like the aforementioned Ginkgo, this is better known for its nootropic benefits. There was a trial that would suggest that it is an efficient ingredient for increasing sexual energy. However, it was a specific type of ginseng, and taken at three separate doses of 1,000mg.

Vitamin D is an ingredient that has proven, in studies, to improve testosterone levels for people who are deficient in Vitamin D. However, people who get enough Vitamin D are unlikely to experience any of the promised benefits.

Although there are studies that have shown it to be very helpful in improving cholesterol levels, taking it in the recommended dose- 1g, could lead to insulin resistance. Which would counter any benefit it could potentially provide. It has not shown to be a very effective testosterone booster ingredient, which makes its presence in the Fyron Mens formula unnecessary.

Hold your pearls, or whatever else you’re holding. Because this shit is expensive. It isn’t the most expensive T-booster supplement we’ve seen, but it certainly is one of them. The Fyron Mens Testosterone Booster costs around 79.95 Euros a pop. That’s around 100 US dollars if you’re wondering.

So yes, this is a supplement you’re going to have to spend quite a bit of cash on. Now, considering the sketchy manufacturer and the shitty ingredients, this is not worth it, at-fucking-all.

Side Effects of Fyron Mens

The ingredients used in the supplement are all-natural and safe for the most part. That’s about as good as this goes. The only real boon in this hell-hole of a supplement. Of course, as a precaution, if you have any pre-existing medical conditions it is always best to check with a doctor before taking anything like this.

Let’s go through this one by one. The first red flag was the lack of information on the company. Fyron Mens is a supplement that sells for a-freaking-lot. As such, it would have been a little more reassuring if it came from a brand that was trustworthy.

100 dollars per month, for a supplement that may or may not even have the ingredients that it promises to have, is a shit deal. For everyone but the assholes behind it.

As for the ingredients. Well, we could go on and on about how shitty they are. Could about talk the devil’s ears off with all that we have to say. However, we’ll make this short. The ingredients suck. That’s it, short and simple.

Not only that, but even the ones that could potentially help out, are so underdosed, that there is no way this can be anymore than a useless piece of trash.

If you’re looking for something to help you improve your bedroom or gym life, there are supplements out there that are so much better than the Fyron Mens. We would wholly suggest looking another way.

The Fyron Mens Testosterone Booster supplement is a horrible deal. The ingredients inside are not only useless but underdosed as well.