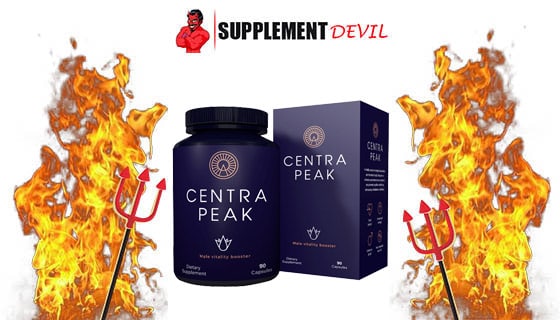 The supplement, has combined key testosterone boosting ingredients alongside some neuroprotective and also neuro enhancing ingredients that can work throughout the day.

But does Centrapeak live up to it’s reviews? And is it worth spending $65.00 of your money on?

The Short Review: After just 10 days taking Centrapeak made us train harder, feel focused and we started to see some good size develop over the month. Our libido also shout up.

Testosterone is a crucial ingredient in the functioning of our bodies for both men and women. It is vital for things such as hair growth, cognitive function, muscle development and other important functions. 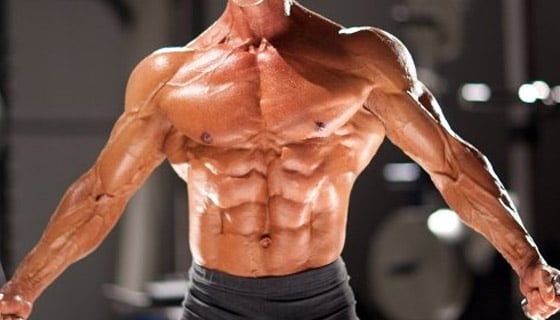 Eating a healthy diet and getting the correct nutrients are important for these functions as well, but those nutrients will not lead to optimum results if it was not for important chemical reactions in the body involving hormones and enzymes.

In other words, hormones such as testosterone will optimize the results you will get from a healthy diet.

In recent times due to hectic, lifestyles and poor diets, testosterone levels in men are quite low. Testosterone boosters are also sought out due to the increasing influence of fitness.

Centrapeak has a solid set of ingredients that can help reduce the stress hormone cortisol and contribute to lean muscle mass and muscle growth.

Centrapeak’s ingredients also offer a boosting effect on gym performance, so you’ll get better energy levels and other cognitive benefits. Mental performance is as important as physical in the gym, and centrapeak’s natural ingredients will boost up both.

Centrapeak is a Cure to the Lifestyle of Modern Men

More importantly, the increasing amounts of stress that is caused by hectic work schedules have led to very high levels of the stress hormone called cortisol among men.

The body tries to balance out hormones in the body, which can mean that high levels of cortisol can be accompanied by lower levels of testosterone. So, it is unsurprising that more and more men are seeking out supplements to boost their testosterone levels.

Testosterone levels also drop as men get older. They drop by around 1% annually when you exceed the age of 40. 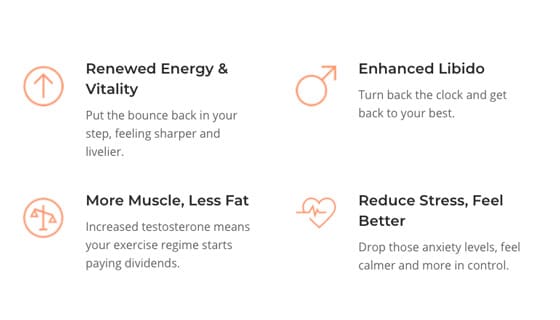 Ingredients in centrapeak such as BioPerine ® have been included to improve the bioavailability of the other nutrients in the formula.

Centrapeak’s formula not only has considered the improvement of free testosterone levels, but also cognitive performance and the absorption of nutrients as well. This is all part of Centreapk being able to reduce cortisol levels and help with levels of sex hormone binding globulin. It is quite tough to find supplements in the market whose formulas have been designed from several angles, the way Centrapeak testosterone booster has.

It makes sense that Centrapeak also considered ingredients to improve mood and cognitive function. Because lower testosterone levels have been attributed to prolonged stress and poor mental health, the first step in helping people develop a healthier physique is to improve their cognitive performance.

After all, every choice we make regarding diets and lifestyles are influenced by our mood. So, there’s no point taking the most potent supplements out there if your mood will cause you to make choices that undoes everything the supplements aim to do.

So, What is Centrapeak?

Centrapeak is a testosterone-boosting supplement that contain nutrients such as Vitamin D3, I3C, Ashwaghanda, Magnesium and Boron that directly aims to improve testosterone production. The formula also contains nootropic ingredients to improve cognitive function such as Lion’s Mane Mushroom.

Centrapeak comes in a bottle with 90 capsules, and users are meant to take three capsules a day accompanied by a meal. During our centrapeak review we had no issues with the amount of capsules or dosing.

Centrapeak can be consumed by men and women to boost testosterone levels (however, it is not recommended for breastfeeding mothers or pregnant women). It is ideal for men in their 30s, 40s and 50s.

You can find the full nutritional profile on Centrapeak’s website with plenty of links to research studies to back up the effectiveness of those ingredients in testosterone boosting. However, we will have a brief look at some of the key ingredients used and why they’re used in Centrapeak.

Ingredients in centrapeak are natural, we can’t stress that enough. So if you’re an athlete looking for a natural way to bring up low testosterone and free testosterone, centrapeak is a good testosterone booster for you. 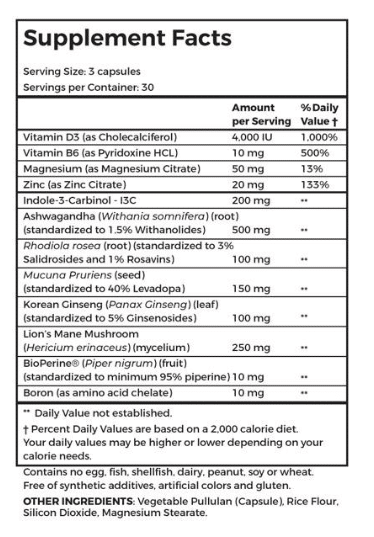 Appropriately nicknamed the ‘’sunshine vitamin’’, your body is triggered to produce Vitamin D when exposed to sunlight or UV light. D3 is the most potent and bioavailable form of Vitamin D. Vitamin D is one of the most commonly overlooked vitamins, with almost 42% Americans getting insufficient amounts. The ideal daily dosage of Vitamin D is in the range 3500-5000IU.

Vitamin D is vital in testosterone production as it is a precursor. It is also crucial in mood regulation, with Vitamin D deficient populations being linked to forms of depression such as Seasonal Affective Disorder.

Centrapeak uses a good amount of vitamin D that can be a big step towards testosterone production and healthy testosterone levels.

Magnesium is also a crucial ingredient in mood regulation and cognitive function. Deficiency has been linked to depression and other mood disorders. Due to intensive farming that have exhausted soil of precious minerals like Magnesium, magnesium deficiency is quite common.

There’s also some evidence pointing to its role in the activation of Vitamin D3 and delivering oxygen to muscle cells.

It is found in a 20mg dosage of Zinc citrate in Centrapeak. Good zinc levels have been linked to increased levels of testosterone and other similar hormones such as DHT. Additionally, it helps to improve depressive symptoms.

Supplementing the right minerals, like Zinc can mean you have a better ability to gain muscle mass and experience muscle growth when training also.

Boron supplementation has been shown in studies to significantly improve free testosterone in the blood in just a couple of hours. It also reduces SHBG levels, which bind to testosterone and lower its overall levels in the body.

Commonly found in cruciferous sources such as broccoli and kale, IC3 is a compound that has inhibitive effects of oestrogen and encourages testosterone. It does this by reducing the production of oestrogen and catalysing its breakdown.

A key ingredient in Ayurveda medicine, ashwagandha is well-known for its effects such as improving libido, reducing stress and anxiety (and hence cortisol) and also improving muscular performance. A study showed that a 300mg dose of Ashwagandha root reduced cortisol levels by nearly 30% within 60 days.

Ashwagandha is found in a 500mg dosage in Centrapeak.

Found in a 250mg dosage in Centrapeak, Lion’s Mane Mushroom improves cognitive function by encouraging the production of Nerve Growth Factor, a protein crucial to the development of new neurons. It has been linked by studies in East Asia to reduced depression and anxiety in older men.

Centrapeak is an extremely meticuliously designed testosterone support supplement that leaves nothing to chance. For $65 you are getting a hefty amount for your money, in results and in the product.

Every ingredient is supported by extensive scientific research and it’s effects highlight this.

Centrapeak offers a far more science based approach to aiding male vitality and testosterone levels than even a lot of the more high priced products on the market. If you are looking for something natural to boost testosterone with, then Centrapeak should be your new #1!