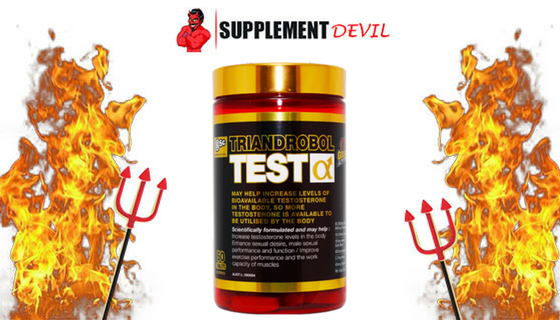 Our BSC Triandrobol Test Review will be inspecting the testosterone booster that is produced and sold by the fitness company called BodyScience. The manufacturer is organized, and has been around for a long time and produces supplements faster than the Devil makes deals.

There is something a little different about this T-booster that sets it apart from others. The BSC Triandrobol Test can boast about large doses. Not quite for all of its ingredients but a couple of key ingredients that BodyScience claims will boost the amount of testosterone inside of a person’s body.

We’ll go further into detail later. However, the overwhelming amount is not necessarily a good or bad thing. Too much of something will not necessarily make it more effective, but of course- that would depend on the ingredient themselves.

No more yappin’ let’s get straight to business.

How does the BSC Triandrobol Test work?

The BSC Triandobol Test is an expensive little shit- or big shit. Depends on how you see it, but the crux is- it’s expensive. Now, the supposed reason for the extra dollar signs, is because of the super-powered ingredients that they assumedly maxed out.

Now, outside of that, some of the ingredients they used have been banned in certain parts of the world. Yes, you read that right. Banned.

This particular T-Booster is also meant to be taken in a stack. Meaning, that you are meant to take this along with a couple of their other supplements- sold separately or in a bundle. As such, the expenses keep piling up. One after the other.

Of course you could choose not to take the whole stack, and just stick to the BSC Triandrobol Test, but either way, you can expect to be spending a lot of money.

Taking the BSC Triandrobol Test requires you to take two capsules twice a day. Which is not necessarily the most ideal. Instead, they could have cushioned some of the effects that you may get from taking to much of one thing- by separating the dosages to at least 3-4 times a day.

Now don’t get me wrong, I might have been judging the hell out of the BSC Triandrobol Test just now, but a brief glance at the label has my eyes crossing. So let’s keep going shall we? Time to dig inside of this hell hole. 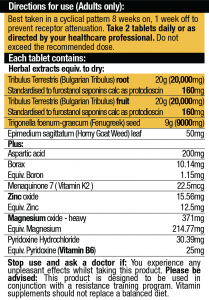 This is an ingredient that- whilst has proven to be effective on rodents, has not been studied enough to have shown positive effects on Humans. The thing is, this is one the ingredients that were super-dosed in the BSC Triandrobol solution- with around 40 grams each of both fruit and root extract- totalling at 80 grams of Tribul Terrestris altogether.

Not only that, but this also comes with around 640 milligrams of Protodioscin, which is the compound inside of the Tribul Terrestris that has been said to cause the libido enhancing effects that the herb is able to give.

Again, not much is known about this ingredients. Outside of the fact that it is able to boost libido through stimulating androgen receptors. Now say the supplement does in fact boost libido- that doesn’t necessarily mean that it will help you gain muscle or lose weight. At most, we know that it should be able to wake up your little-guy down-stairs, leading to some great times in the bedroom.

However, outside of the little ego boost- that makes you feel like it is working, we can’t say for sure if it will actually be able to help you gain muscle or not.

This particular ingredient is very similar to the previous, in that is meant to help boost libido. Once again, this boost in libido could mean that the ingredient is working, but it can also just be a useless ingredient- that doesn’t actually help you in the gym.

Now, unlike Tribul Terrestris, Fenugreek has been said to promote the existence of ‘free’ testosterone by keeping chemical reactions from happening that will lead to the decrease of estrogen and DHT.

The effects of this ingredient are quiet blatant- based on the name itself. Is it a reference to the devil’s goat-y horns? We can’t be certain, but what we can be sure of, is its ability to boost libido. Again, that doesn’t necessarily mean that your levels of testosterone will be increasing, just that you’ll feel a little stirring downstairs.

Unlike the previous ingredients, D-Aspartic Acid is a well-researched ingredient that has actually been proven to work. It’s been researched enough for us to know that it is able to at least temporarily boost testosterone after a short period of time.

Unfortunately, unlike the super-dosed ingredients that had previously mentioned, there are only 400 milligrams of D-Aspartic Acids inside of the BSC Triandrobol Test formula, which might not be enough for everyone This calls forth the question of whether it actually works.

As previously discussed, it’s going to cost more than an arm and a leg to be able to afford this supplement. It’s meant to be taken twice a day, and with 60 tablets per container- that should be enough for a month’s worth.

The supplement is available for purchase online, however, because some of the ingredients are banned in certain countries- you might not be able to purchase it all. Although honestly, I don’t know why you would, or how you would be able to afford it without having to summon up the devil and making up some kind of deal.

The supplement is sold for around 89.90 US Dollars, on the account that some of the ingredients are super-dosed.

Side Effects of BSC Triandrobol Test

It’s expected that an ingredient like this cause some side-effects, however, the ones to look out for are as follows:

Although the choices in ingredients are not necessarily bad, the ingredients that are super-dosed are more likely to increase your libido- rather than actually help you boost your testosterone.

Although the BSC Triandrobol Test does carry a good selection of ingredients- the ones that are proven to work are underdosed.