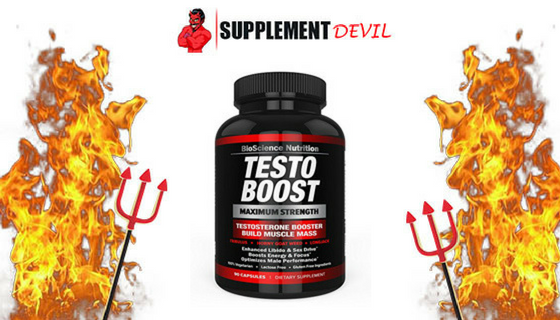 Testoboost is a supplement that is meant to boost testosterone and is manufactured by the Bioscience Nutrition Company. We will be analyzing the hell out of this supplement in our Bioscience Testoboost Review.

Now, at a glance, you can see the percentage composition of each nutrient inside Testoboost. However, we are disappointed that the manufacturer has omitted a number of major T-boosting nutrients, such as D-Aspartic acid and Vitamin D3. That aside for now, we shall look at it in detail in the next section as we analyze the nutrient profile of Testoboost.

Let us first look at the company behind this supplement. The Bioscience Nutrition Company is based in the USA. Since there is (sneakily) no trace of any website associated with the company it is our presumption that Amazon.com is its sole marketer.

To be honest, this is not too sinful of a problem, even though we are interested to know if the products are manufactured in the USA or UK under strict FDA or GMP regulations to be guaranteed that they are effective and safe.

How does Bioscience Testoboost work?

Overall, theTestoBoost has seven ingredients. Seven is actually a high number for a supplement. As we found in the past, most of the products with more than ten ingredients are normally under-dosed.

Though Bioscience Nutrition has made attempts to find out the right ingredients while coming up with the Testoboost formulation, we cannot overlook the absence of Vitamin D3, which is the main nutrient of a testosterone booster.

We will expound on this as we focus on each ingredient contained in Testoboost. We trust that by the end of this review you will have the nitty-gritty of how effective and safe this supplement is. 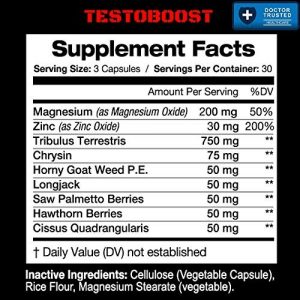 Its ability to perform as a glucocorticoid antagonist has made people to believe that it has an anabolic activity. However, there are no documentations to support this. Most of the earlier reports concerning Cissus use a more scientific approach.

Concerning this ingredient, there lacks reliable evidence supporting its ability to boost the levels of testosterone. Nonetheless, it helps to reduce blood flow and inflammation. Any other article suggesting that Hawthorn berries increase testosterone is just bait to make you buy the product.

This is a fatty acid, which for a long time was advertised that it helped to raise testosterone levels, but it was later realized that this information was untrue and misleading. The truth is that it inhibits the enlargement of the prostrate. It is therefore recommendable to those taking prohormones or steroids.

It is an aphrodisiac and a pro-fertility agent with a lot of supportive evidence for the same and some terming is as a pro-erectile and an anti-estrogen agent. Some research supports its ability to boost the level testosterone in animals and humans but the evidence lacks good clarity and is not well proven.

According to research, this ingredient increases men’s testosterone production.

Studies have shown that this mineral is associated with the increased production of testosterone.

Though research in laboratories show that it can increase testosterone, there is no such evidence in humans. Only a small amount of chrysin may be absorbed from the intestines thus making it less effective.

Extracts of this plant were used during the Cold War by the Eastern Bloc Olympic Athletes. It is touted to be a miracle plant but there is no evidence to support this.

The Bioscience TestoBoost, goes for around 22.75 US Dollars. Which is on the cheaper side. You won’t be breaking bank with this one. Put away your devil forks- no sacrifices needed.

Side Effects of Bioscience Testoboost

We now have good news concerning TestoBoost ingredients, that most of them are safe. However, people have taken slight issues with Tribulus terrestris whose potential to cause some shitty prostate problems has been noted.

Even if the Bioscience Nutrition Company did a good job manufacturing TestoBoost, its ingredients have not been proven to boost testosterone levels. Most of them are crap, to be perfectly honest.

The product also lacks testosterone boosting nutrients such as Vitamin D3, which would have improved it. This product may be cheaper than many other test boosters, but it is in effective.

In our honest opinion, TestoBoost will have little effect, on the levels of testosterone in your body. The servings are also not that good. With a single serving in a 24 hour interval, you will not achieve day long testosterone boosting effect.

It is therefore not the best testosterone booster on the market.

The Bioscience Testoboost is definitely not one of the better supplements out in the market. It should provide mild benefit at best.

Benefits of a pre workout supplement before cardio