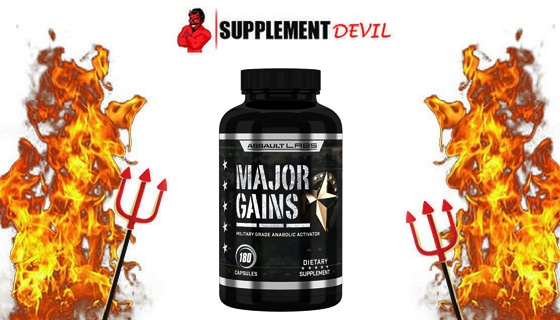 Our Assault Labs Major Gains Review will be breaking down this t-boosting product from one of the older supplement companies out there. This one isn’t as well known as the rest; however, it’s been around long enough that we’ve looked into a couple of their other supplements before!

So far, Assault Labs hasn’t made anything yet that caught the Devil’s attention. BUT, perhaps this will be their shining glory! As of right now, I’ve cleared my personal views on the company — in order to offer a completely objective review of their new testosterone product!

This t-booster comes in a classic match-up of black and gold, with the gold being nothing but a small trim around the designs. Overall, it’s not a bad looking product and despite our past experiences with the company, they’re not all that bad too!

So, we’re starting off at a fairly optimistic standpoint here. But of course, that won’t stop us from analyzing the hell out of this supplement throughout the rest of our Assault Labs Major Gains Review! Give it a scroll and learn more about what makes this supplement good AND what makes it bad.

You can check the review of another Assault Labs Sergent Steel product we did here. Their pre workout Wild Thing has been reviewed here.

How does the Assault Labs Major Gains work?

The first thing to discuss, is the how. There are many t-booster supplements out in the market, but they’re not all created equal. There are grave differences between one and another that allow them to appeal to different markets in the same community.

So, what’s the Assault Labs Major Gains guarantee? What are they promising with this new formula of theirs? The answer to that is actually fairly simple and is already in the name! They’re hoping to help you make major gains by upping the level of testosterone inside of your body.

They plan to do this through the use of 6 different ingredients, all of which are meant to help you out in different ways (detailed inside of the ingredient section.) So yes, so far so good! However, we reach a bit of a stump with the Major Gains supplement.

It uses a proprietary blend. These, although fancy sounding, are horrible-horrible-horrible things. I never like seeing them inside of supplements, because a company that isn’t honest about their formula, doesn’t deserve to be trusted in the same way as companies that are honest.

And that’s what prop. blends are. A dishonest method of hiding the true effectiveness of the formula (by not showing specific doses.) Continue reading down below to learn more about said ingredients! 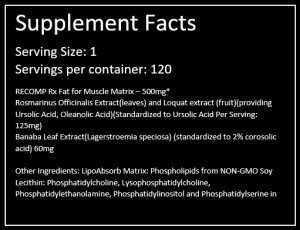 This is the most identifiable ingredient inside of the Assault Labs Major Gains. It’s something that we see in a lot of t-boosters, mainly for its appeal as a protein synthesizer. Unfortunately, these benefits are not all that prominent. It has shown promise in theory, but the application of said theory has not been all that great.

It’s too poorly absorbed (making it highly ineffective), and this has been studied enough that everyone should know that. However, supplements still end up using it in their formulas.

Unlike the previous ingredient, there’s really not much known about Maral Extract to determine its level of effectiveness. It’s been said to offer a boost in strength and has been linked with anabolic steroids (which are a big no-no on their own.) However, there is insufficient evidence proving any of this to be true. There’s also added risk of side-effects.

Leucic acid is a leucine (amino-acid) metabolite that has been said to provide anabolic benefits. There has been seen to take effect in some way. However, the benefits (much like the previous ingredient) are largely unfounded. I would feel more secure taking this if it were looked into a little more.

This is an ingredient extracted from the skin of apples. There are preliminary studies that suggested that it could help increase muscle mass and decrease fat. However, these studies are not proof of positive as most of them had been rather poor in quality. None of these had been human research either, which I would be more susceptible in believing.

In all honesty, I don’t quite understand the pricing. The Assault Labs Major Gains goes for around 59.95 US Dollars, per container! That’s a shit ton of money, considering the quality of ingredients that they offered. Is it worth it? … Eh, I’m leaning towards a hard ‘no.’

There’s really only one ingredient in here that has a potential of causing problems. That is, the Maral Extract. Maral is believed to be an anabolic-like substance connected to the blood. Which could ultimately lead to increased risk of bleeding disorders and bruising.

This concludes our Assault Labs Major Gain Review, and honestly? I wish I had better things to say. There were many things about this fat burner that was new and innovative. They tested out a bunch of anabolic substances that should, in theory, help you make massive gains.

However, none of these ingredients have been tested enough for me to standby this formula. Well, outside of L-Arginine, which had proved completely ineffective when supplemented.

So yeah, this isn’t really something I would use myself (or recommended to anyone else for that matter.) However, if you’re looking for a testosterone booster to help you gain muscle, check out our Top 5 Testosterone Booster List!

Not only is the Assault Labs Major Gains extremely overpriced, but the ingredients of it are unproven! There's nothing in here that would even suggest any kind of testosterone boosting function.