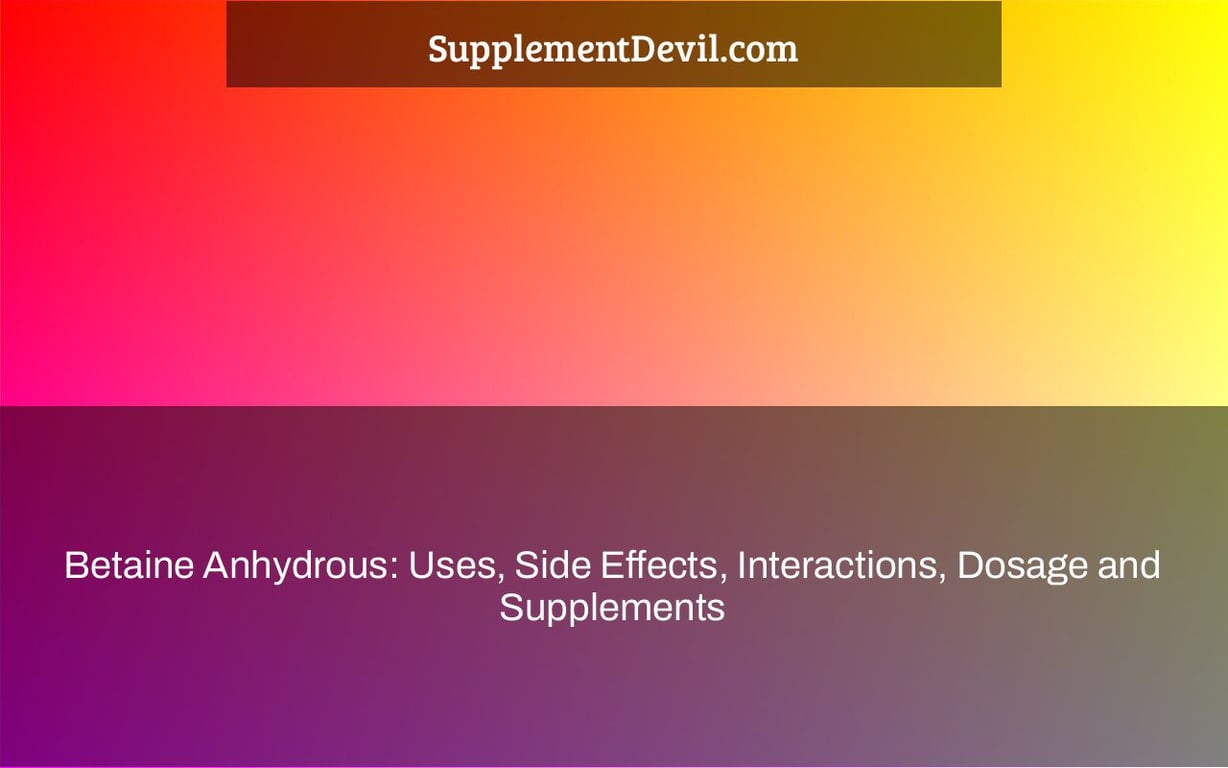 Betaine is a natural supplement found in beets and it has been used by athletes, bodybuilders, and others to help with muscle growth. However, when taken at high doses or combined with other substances such as creatine can lead to serious side effects like liver damage.

Betaine Anhydrous is a strength and power output component included in a variety of pre-workout and muscle recovery supplements. Although many claims are unreliable owing to a lack of scientific data, this substance has been found to have many performance improvements.

In one research, cyclists’ average power production during a 12-second sprint rose after receiving 2.5g of Betaine over the course of two weeks. Another research found that the bench press enhanced the subjects’ peak power output, whereas the squat showed no gain in power output but a rise in repetitions to exhaustion.

While the performance advantages of Betaine Anhydrous have been inconsistently reported in the literature, the health benefits are apparent.

Betaine Anhydrous is a methyl donor, especially for homocysteine, an amino acid. This simply indicates that Betaine is a homocysteine regulator in the body. Because homocysteine is a biomarker that suggests a risk for heart disease or problems when it is raised, this is a substantial health advantage.

Betaine also functions as an osmotic agent, promoting cellular hydration and controlling fluid levels both within and outside the cell. This is why some intra-workout and post-workout recovery solutions include Betaine.

It’s important to take Betaine on a regular basis to get the full range of health advantages. If Betaine administration is maintained, studies suggest that homocysteine levels stay controlled.

The primary purpose of Betaine Anhydrous for performance improvement is to increase strength output. Creatine has the most synergistic association with Betaine, owing to the similarities in improving power output as well as the potential to promote cellular hydration. To maximize the advantages received from each, it’s a good idea to supplement with both of these components on a regular basis, even on rest days.

Other compounds that interact well with Betaine include Beta-Alanine and Taurine, which are used to increase endurance and strength. It also works well with nutrients that aid in recuperation, such as Amino Acids.

Because betaine anhydrous is a naturally occurring chemical found in several plants, it is typically well tolerated. However, it is well known that taking Betaine supplements might cause an upset stomach or a queasy sensation.

For performance advantages, a dosage of 1,500mg is advised. Many studies have shown that dosages of 3,000mg to 6,000mg are effective in improving cardiovascular health and lowering homocysteine levels.

We propose 1,500mg-2,500mg for performance increase and muscular rehabilitation.

The items listed below contain Betaine Anhydrous at the prescribed dose and are suggested as supplements for:

Betaine anhydrous is a supplement that is used to help with digestion and absorption. It also has some other uses like improving athletic performance, lowering cholesterol levels, and treating chronic fatigue syndrome. Betaine is usually taken in the form of betaine hydrochloride. Reference: betaine anhydrous dosage.