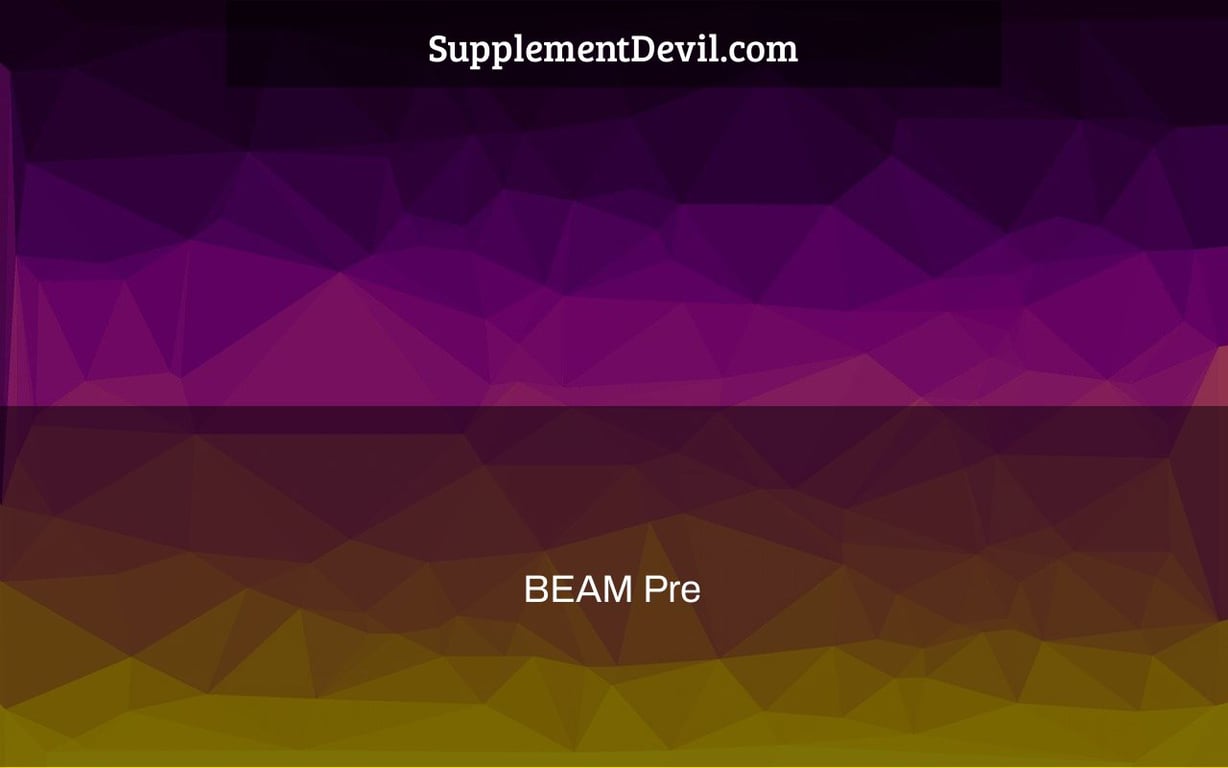 What should you take to make your workouts more effective? What’s the best pre-workout supplement on the market that promises phenomenal energy, focus and muscle growth? Look no further than BEAM

BEAM Pre is a supplement that has been designed to help people get the most out of their workouts. It contains ingredients such as creatine, beta-alanine, and taurine.

BEAM Pre-Workout is a brand-new pre-workout on the market, and it’s ready to take off. The folks behind the company are supplement industry veterans with more than 30 years of expertise.

These days, it seems that new businesses just go to Google, look at what others are doing, and then simply add more of an element. BEAM, on the other hand, has the expertise to create a pre-workout that does not include excessive levels of stimulants or excessive amounts of caffeine. As you can see, the BEAM Pre-Workout is a good pre-workout supplement with a modest amount of caffeine and well-dosed components.

BEAM puts its years of knowledge in the field to good use by creating a well-rounded pre-workout that will help you perform better in the gym.

Citrulline is a fairly prevalent pre-workout component, and it’s for good reason: it’s frequently the first ingredient on almost every pre-workout label these days. Citrulline breaks down into Arginine, which raises Nitric Oxide levels. Pumps will benefit from this. It is well dosed at 5 grams.

Carnosine is a precursor of Beta-Alanine, which is useful for endurance. To put it simply, it buffers lactic acid during exercise and is almost as ubiquitous in pre-workout supplements as Citrulline. It is at the therapeutic dosage of 3.2 grams.

Betaine Anhydrous is a popular pre-workout supplement component that has grown in popularity in recent years. It has been demonstrated to help in increasing power output. It is adequately dosed at 3 grams.

Taurine has been introduced to a variety of goods in recent years, and with good cause. It improves blood flow and helps to reduce cramps. It is well dosed at 2 grams.

We’ve arrived at the first nootropic substance. Tyrosine, a precursor to catecholamines like dopamine, has been found to help with concentration. It’s one of the first elements to come up with if you’re looking for a way to concentrate. It’s dosed perfectly at 2 grams.

Ashwagandha KSM-66 is a trademarked version of the herb. Ashwagandha is a popular stress/cortisol-reduction substance. It is dosed well in BEAM Pre at 300mg.

Caffeine is the most widely used component in pre-workout supplements, and it really doesn’t require an introduction. Caffeine, of course, provides you energy, and at 250mg, it’s somewhat less than the normal pre-workout these days, which we think is a good thing. For the great majority of individuals, it should deliver a significant increase in energy.

Theobromine is found in cocoa extract. Theobromine is a xanthine that is comparable to caffeine but less potent. It has been shown to boost energy levels without raising blood pressure.

It’s good to have Grape Seed Extract on this list. It’s a component that helps to decrease blood pressure. It is often utilized to aid in the production of a fuller pump. It’s dosed correctly at 200mg.

These days, theanine is showing up in an increasing number of pre-workout supplements. Theanine is often referred to be a “mood-enhancing” substance. It may be sedative on its own, but when mixed with stimulants, it can help individuals avoid the jitters and anxiety that stimulants like Caffeine and Yohimbine can cause. The dose of 100mg is enough.

Other substances’ bioavailability is improved by AstraGin®. This means you’ll be able to employ the substances more effectively than if you didn’t use AstraGin®. It’s dosed correctly at 50mg.

Grapes contain the antioxidant resveratrol. It’s been shown to help with heart health. It’s not often seen in pre-workout supplements and is normally offered separately, so it’s odd to see it here, but we’re not averse to it being included in the pre-workout recipe.

Ryan: Since receiving this pre-workout, I’ve had the pleasure of utilizing it multiple times. Despite the fact that this isn’t our complete, in-depth analysis, I appreciated it. You’ve got a lot of energy and concentration, as well as a terrific pump. Like most watermelon tastes, the flavor is well-done. I appreciate that it doesn’t have a lot of stimulants in it. This helps to avoid a collision. Throughout your training, your energy levels should be maintained.

Gerhard: I enjoy the pre-workout in general. It’s dosed correctly where it’s needed, such as Citrulline, Betaine, and Tyrosine, and it’s not a stim bomb. Because the norm has been 300mg+ for so long, the dosage of 250mg of Caffeine seems noteworthy. While this pre-workout isn’t new, it seems to be effective and should be ideal for individuals who don’t want to train with a stim bomb every time.

BEAM Pre is a supplement that you can use to help your body recover from strenuous physical activity. It contains ingredients like antioxidants, vitamins, minerals and amino acids. The product is available in capsule form. Reference: you can beam.

How much caffeine does beam pre workout have?

A: Beam Pre workouts have a caffeine content of 20mg per serving. This is the equivalent of one latte, or two cups of coffee.

A: Gorilla mode is owned by players.

What does pre workout do?

A: Most pre workout supplements include caffeine, which can help you feel more awake and alert. Muscles are also often stimulated by the supplements ingredients such as creatine monohydrate or beta-alanine to help them rebuild faster. There are other possible side effects of these products that may be worth considering if theyre a concern for you, including increased heart rate and sweating.