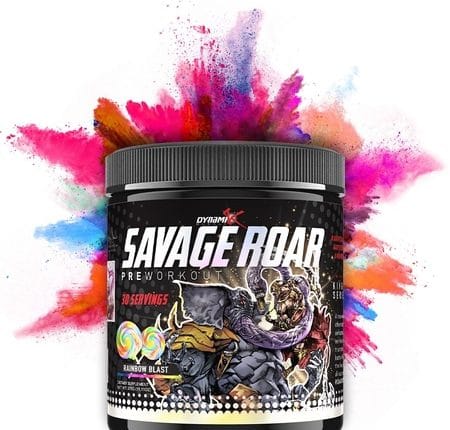 After making a name for himself on the bodybuilding stage by achieving a wealth of honors including several placements in the top three, Kai Greene went on to make his mark on the supplement industry by launching his own supplements brand Dynamik Muscle back in 2015.

In more recent times, Dynamik Muscle has made the decision to release an all-new range entitled the King Kai series. Named after Kai Greene’s comic book line – Chronicles of King Kai, the first of the supplements in the range is ‘Savage Roar’, which is now available to pre-order.

The first new product to be launched by the brand in a long while, Savage Roar is pre workout supplement. Designed to boost pumps and performance, Savage Roar contains a total of seven main ingredients. This consists of the following:

As you can see above, there are a handful of proven ingredients in this supplement. However, it’s worth being cautious when it comes to your overall caffeine intake. This is because a whopping 300mg is found in Savage Roar.

It perhaps would have been better to not include bitter orange extract, though. This is because it is known to cause negative side effects in certain individuals. So, it’s worth reading up on this beforehand.

Do you like the sound of Kai Greene’s all-new Savage Roar pre workout? If so, you can head on over to the official online store. From there, you can place a pre-order, which at the time of writing, costs $39.99 for a 30 serving container.

As always, you can count on us to keep you posted with all the latest supplement news and reviews. So, until next time, folks!