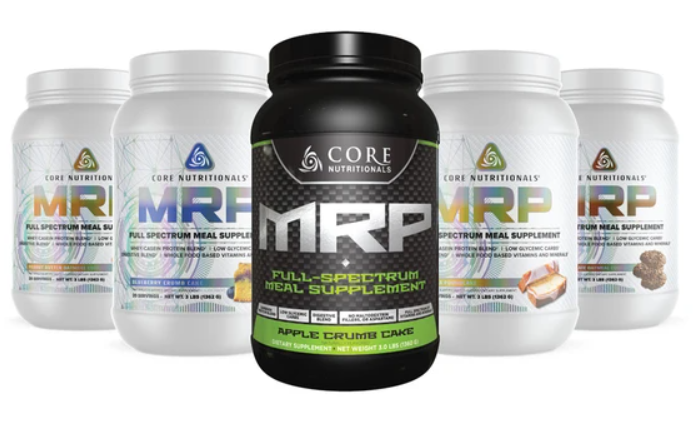 Ever since being launched in 2005, Core Nutritionals has grown to become one of the most widely-known supplement brands across the globe.

Priding itself on being a brand which doesn’t use cheap fillers or proprietary blends, Core Nutritionals has an extensive range of high-quality supplements from protein powders to pre-workouts, and everything in between.

One of the first products it released was its meal replacement – Core MRP. But now, Core decided to revamp the product with a slightly different formula than before.

Continue reading as we take a closer look at the changes for Core MRP in the following article.

The new formula for Core MRP is pretty much the same as before. But this time, the brand now transparently lists its sources of protein.

According to the supplement facts label, the updated Core MRP includes 27g of protein per serving which comes from various sources such as:

The label also lists in full the nutrients and typical amino acid profile for full transparency.

The revamped Core MRP is now available to buy after Core Nutritionals made it available to consumers via its official online store.

So, that concludes our complete overview of Core Nutritionals’ updated Core MRP!

Are you interested in buying the product for yourself? If so, simply head over to the Core MRP product page on the Core Nutritionals website.

To celebrate the release of the all-new formula, Core Nutritionals is currently running a promotion where you can pick up one tub for $44.99 (original price $49.99).

There is also a bundle available which includes one of each flavor. At the time of writing, this will set you back $169.99 and includes one free tub of MRP Apple Crumb Cake.

1UP Nutrition Releases New Flavors for 1Up Bar and BCAA/EAA