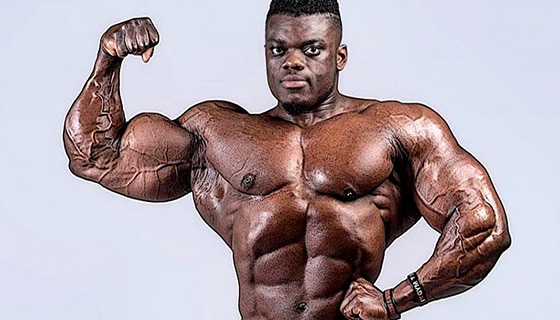 Redcon1 is a supplements company that most definitely has big ambitions for the future. After all, they already boast the likes of bodybuilder Antoine Vaillant, four-time World’s Strongest Man winner Brian Shaw, and powerlifter Ray Williams on their team.

But, they certainly show no signs of slowing down any time soon. Why? you ask. Well, they just so happen to have added another well-known athlete to their roster. This comes in the form of IFBB Pro bodybuilder Blessing #theboogieman Awodibu.

In our latest news piece, you’ll discover exactly what you can expect from this gigantic bodybuilder and what he can deliver at Redcon1.

If you don’t know by now who Blessing is, then you might just have been living under a rock. He’s most definitely a big deal in the world of bodybuilding. So, for Redcon1 to sign him up, that certainly suggests they have some huge plans in store for the future.

Earning his IFBB Pro Card in the 2017 IFBB Diamond Cup Czech Republic, Blessing was able to make his mark on the world of bodybuilding and set himself up to become a social media phenomenon.  Here’s what Blessing had to say regarding his earlier success:

“My first international show, and PRO Qualifier was IFBB Diamond Cup in the Czech Republic in May 2017. Here I won the super heavy weight class and the Overall title, winning me the Pro card – I can’t describe that feeling of happiness but I did not stop there!

A week later I flew to Portugal where I competed at the IFBB Diamond Cup, Espinho. I also won the super heavy weight class and the Overall title, winning my second Pro Card – 3 Overall’s in 2 months – not too bad some might say!”

Amassing over 1.2 million followers on Instagram at the time of writing, it’s safe to say that he has established himself a huge online fanbase.

The Irish 2x Arnold Champion still has many years ahead of him in his bodybuilding career too. At the time of writing, he’s just 27-years-old.

So, it most definitely wouldn’t be surprising for him to reach new heights in his career by achieving more success on the bodybuilding stage.

Redcon1’s ambitions for the future are clear to see given the huge names on their team. Blessing is certainly no exception! For him to join an already impressive roster, it has to be said that Supplement Devil is pretty excited about what’s to come from this particular supplement company.

After they became one of the top-rated supplement brands of 2017, Redcon1 will certainly look to continue their admirable growth streak which they have enjoyed over the past year or so.

As always, you can count on Supplement Devil to keep you in the loop regarding all of the latest news regarding supplements – Redcon1 included. Also, if you’d like to keep an eye out on what exactly what Redcon1 are up to, you can head on over to their official website right here.