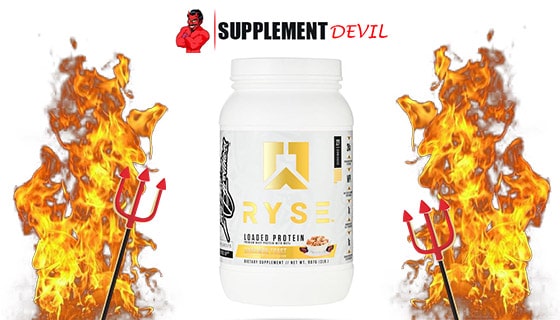 Ryse supplements are certainly well-known within the fitness world. After all, one of the biggest athletes in the world, Conor McGregor, signed with them in September 2018. In doing so, he left BSN supplements who were his previous sponsor.

Ryse Supplements are a company partly managed by Joey Swoll, and have plenty of supplements for sale as part of their range. This includes the likes of Ryse Test Boost, Ryse Fat Burner: Time Released, and more. Our Ryse Loaded Protein review looks into another product in their arsenal.

In the following post, we look into exactly what you get with the product and how it stacks up against the competition. So, read on as Supplement Devil tells you everything that you need to know in our review of Ryse Loaded Protein.

First impressions of Ryse loaded protein are decent. In a market that is absolutely full of options, establishing themselves as a dominant force in the world of protein powders won’t be an easy task.

In spite of this, Ryse Loaded Protein definitely looks like it could well become a hugely popular option. This isn’t surprising either, considering there are two tempting options when it comes to flavors.

This includes cinnamon toast and chocolate peanut butter cup – two very delicious sounding flavors. We opted for the latter ourselves, and it’s safe to say that we weren’t disappointed. It is actually made with PB2 powdered peanut butter, which is a well-known brand around the world.

Even though there are only two flavors, there’s nothing to say that they won’t add more in future. But for now, these two flavors are a great start.

What Will Ryse Loaded Protein Do?

Ryse Loaded Protein is a protein supplement that will allow you to recover efficiently from your workouts and uses whey isolate as a primary protein source.

With one serving, you get 25g of premium whey protein, which is about average for many protein powders on the market. You could even go for more than one serving if you’re hardcore as f**k. Or, if you need to get in some extra protein for the day – whichever you prefer! 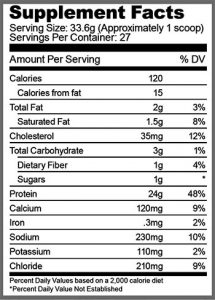 Within Ryse Loaded Protein, you get premium MCTs, otherwise known as Medium Chain Triglycerides. These can help to suppress your appetite, boost your metabolism, and even reduce your fat stores.

According to the about section on the Ryse Loaded Protein product page, this ‘adds fuel to your protein’. This certainly sounds good to us!

That’s not all though, as there are organic prebiotic fiber is included within the product too. Therefore, this is able to aid with digestion, and so has the potential to help with weight loss too.

As we mentioned earlier, you get 25g of premium whey protein per serving of Ryse Loaded Protein. This equates to approximately 1 scoop (33.6g) and comes in at 120 calories.

Carbohydrate levels are pretty low, and there is only 1g of sugar per serving. So, if you’re on a low carb diet or just keeping an eye on your sugar intake, you can rest assured this is a great option for you.

You can buy Ryse Loaded Protein directly from the Ryse Supplements website. For a total of 27 servings, the price comes in at $44.99, which is about average for a protein powder from a top brand.

Overall, it is safe to say that we were quite impressed when it comes to Ryse Loaded Protein. Not only is it a premium choice for a protein powder, but the additions of organic prebiotic powder and premium MCTs is also something which further adds to the appeal of the product.

That’s not all though, we were impressed by the flavor of the product too. While we only tried the chocolate peanut butter cup flavor, we believe the cinnamon toast flavor is likely to be just as good.