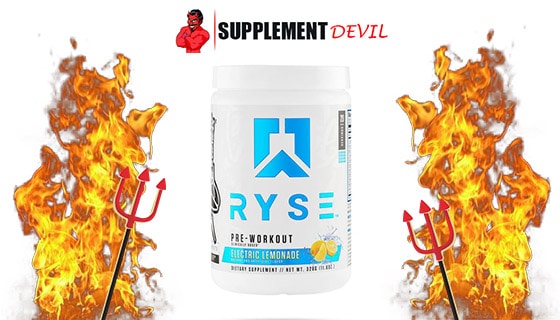 Looking to take your workouts to the next level? If so, you’re most definitely not alone. Many people try anything and everything to get the gains they desire to build a lean and muscular physique.

But, a great starting point would be to use a pre-workout supplement. When you choose a product with effective ingredients, this is a sure-fire way of getting the most out of each and every workout. On that note, it’s time for us to review Ryse Pre-Workout – a supplement from the company partly managed by Joey Swoll.

We have already reviewed their Testosterone Booster supplement and Loaded Protein. But, in this article, you’ll find out everything you need to know in our full Ryse Pre-Workout review – learning all about the ingredients, price, and more. So, read on as we take an in-depth look at the product.

When it comes to first impressions of Ryse Pre-Workout, it can be said that we were quite impressed. The ordering process was plain and simple, and it was easy to navigate the website to complete our purchase.

There are two flavors available to choose from, and it’s safe to say that each of them are pretty unique. There is candy watermelon for a start, in addition to Electric Lemonade. We decided to go for the latter and found it certainly delivered in the flavor department.

As well as this, the fact that the product uses no proprietary blends like the other supplements in its range is great. Supplement Devil always recommends that you stay clear of brands which use proprietary blends – they simply aren’t desirable due to the fact you don’t know the exact dosages of the ingredients you are consuming.

However, the website could be improved in that it could include more information about the product. For example, it doesn’t mention too much about the ingredients – only a couple of short paragraphs.

What Will Ryse Pre-Workout Do?

Ryse Pre-Workout is, as the name suggests, designed to be taken before your workout. When consumed according to the manufacturer’s guidelines, you can expect the following benefits: 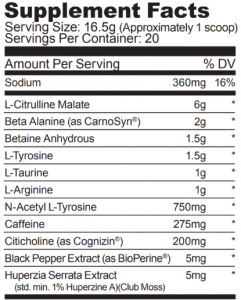 This is an amino acid which not only improves blood flow but also enhances physical performance during your workouts. We like that Ryse included this ingredient as it has been proven to give insane pumps.

Known to reduce fatigue, Beta Alanine is a useful ingredient to have in that regard. However, it is also renowned for causing a tingling sensation. This was the case when we tried the product ourselves.

This is an ingredient which is found within sugar beets. Body composition has the potential to be improved, in addition to increased power. Studies such as this one proved this.

Tyrosine is known to reduce stress hormone levels, and can effectively give you better performance in the gym according to various studies such as this one.

Taurine is another amino acid which reduces fatigue and can also improve pumps when used in doses of around 1g. However, there are better options out there such as red beet.

Even though this is a great addition, caffeine anhydrous needs to be dosed effectively so that side effects don’t occur. There’s 275mg of caffeine per serving in this product. So, it is probably best to start with a lower dose of the pre-workout to start with.

This is a form of choline which can improve your focus and cognition. Although, more evidence is needed to prove this to be true.

This is a compound which is said to be useful for cognitive functioning which in turn leads to better results in the gym. However, there is insufficient evidence for this.

When it comes to side effects when using Ryse Pre-Workout, we found that on occasion, we encountered energy crashes. This was likely to be down to the fact the product contains 275mg of caffeine per serving.

Ideally, less than 200mg per serving is what you should be aiming for when it comes to caffeine. Plus, if you consume caffeine in other ways such as in coffee or tea, you could end up consuming a heavy amount of caffeine each day which provides the opposite effect to what you want!

In addition to the high caffeine content, there’s also the fact that the inclusion of beta-alanine meant that we suffered from a tingling sensation. While not harmful, it’s pretty off-putting when you’re pumping iron!

You can purchase Ryse Pre-Workout directly from the manufacturer’s website. So, at least you’ll know that you’re getting the genuine product. It comes in at a cost of $49.99 at the time of writing.

This is towards the higher end of the market so it is safe to say that is relatively expensive for a measly 20 servings. So, it would perhaps be best to look elsewhere if you’re in search of a more cost-effective option.

When we tried out Ryse Pre-Workout for ourselves, it can be said that the results we were able to get could have been better, in spite of the fact we liked that there were no proprietary blends used.

We went into workouts feeling energized and alert, but a higher dose of caffeine than we would usually go for meant that we suffered from unwanted side effects. What’s more, the fact that beta-alanine was included didn’t make things much better due to the tingling sensation.

Even though Ryse Pre-Workout contains some effective ingredients, the fact that the product is so darn expensive means that there are better options out there if you are looking for an effective option that’s good value for money.

Not only that, the dosages could be better for certain ingredients too. For that reason, we think that you can find a more effective option at a similar or even lower cost.

To find out more about our top recommendations for pre workout supplements, you can take a look at our pre workout reviews page here.