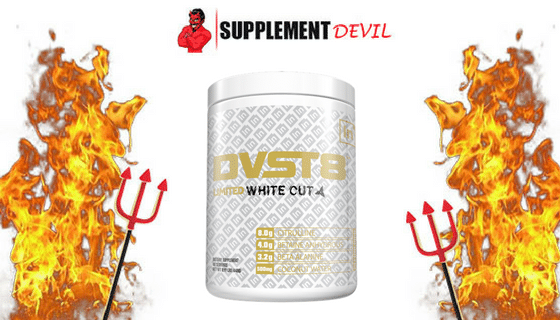 Our DVST8 White Cut review will analyze this pre workout, which is claimed to help promote performance, strength, muscle pumps, endurance, and energy. We will be taking a closer look at this product to see how well it works to determine if it is worth a try or if it should be tossed into a fiery pit.

How does the DVST8 White Cut work?

This supplement does include a proprietary blend. Which means that some of its ingredient dosages are hidden and grouped together under a single larger value.

Therefore, the user can’t tell their dosages or how effective they are. This is something that we absolutely despise seeing in the Pre Workouts that we analyze. This means that the supplement company had something to hide, and whatever that is- it isn’t very good. 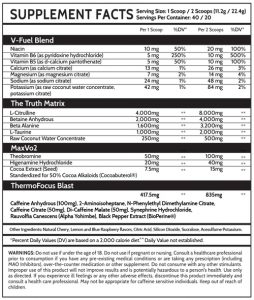 It is an amino acid that is good for endurance and works well for muscle pumps.  This promotes blood flow and the overall muscle endurance, which results in increased muscle pumps.

This ingredient is derived from Beetroot extract. Betaine plays a part in improving the overall levels of plasma nitrate. This helps the user train stronger and for longer periods. However, it is a fairly ineffective ingredient.

This ingredient is an amino acid that helps buffer the acid in the user’s muscles. It helps with endurance and power output.

This is an amino acid that helps increase the flow of blood in the body of the user. This assists slightly in muscle pumps but plays a great role in absorption. It helps the body to absorb the other nutrients faster.

This is an ingredient that boosts energy in the body of the user. Raw coconut water can perform better than energy drinks. After being absorbed into the user’s system, coconut water replenishes electrolytes in the body. This assists users to work out more in the gym.

This is an amino acid that is usually found in cocoa and chocolate. This ingredient helps help in boosting faster absorption of DVST8 White Cut in the user’s body.

This ingredient is believed to assist in burning of fat because it is structured in a similar manner as a banned fat burner, which is referred to as Ephedrin. No studies have been performed to prove that this ingredient burns fat and therefore it is not highly relied on.

Caffeine is among the best natural stimulants found in the market. This stimulant has been known to improve metabolism, power output, focus, and energy. This ingredient helps the user to go hard when in the gym for a few hours both in power and stamina.

DMHA stands in for DMAA. DMAA is a nutrient that was commonly used in pre-workouts but it caused several side effects and was therefore banned. However, DMHA has not been banned but just like DMAA, it assists in improving energy and focus. This ingredient may, however, cause some side effects.

This nutrient burns fat and it is believed to help in burning calories and enhancing energy. However, no studies support its effectiveness and it also causes side effects. This ingredient does not really function for this pre-workout because it has not been linked to enhancing performance.

This is another nutrient that acts as a fat burner in DVST8 White Cut. This ingredient is usually used as an appetite suppressant by factories that manufacture supplements and they claim that it is effective. This ingredient, however, causes some side effects.

Although this ingredient does not really function as a performance enhancer, it has other benefits. It is great for increasing absorption of other ingredients.

This product costs 49:99, which is relatively expensive when compared to other pre workout supplements.

One should be concerned about some of the ingredients found in this product such as Beta Alanine, Eria Jarensis, DMHA, the Yohimbe and Synephrine. The side effects of DMHA and Eria Jarensis have not yet been proven, but they are still a matter of concern because they were added to this supplement so quickly to replace DMAA. Research on these nutrients is yet to be carried out.

Beta Alanine is believed to cause paresthesia (itching on the face and hands). Although it is not harmful, it distracts a person incredibly when training.

Synephrine causes various side effects such as:

Yohimbe is reported to cause

There are better Pre Workouts out there. If you’re looking for one that will work for you, I suggest checking out our Top 5 Pre Workouts Review. It should help you muddle through the rest of these shitty Pre Workouts.

The DVST8 White Cut Pre Workout does contain a few good ingredients. However, those ingredients are under-dosed, and there is too large risk pool of potential side-effects.

Why is vitamin D good for testosterone boosters?