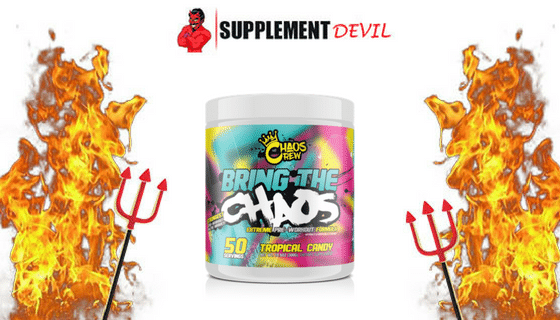 At this time, Chaos Crew has two products under their name that have achieved a decent level in popularity. In fact, Chaos Crew went as far as revamping their formula for both their pre workout and their fat burner!

As far as ‘Bring the Chaos’ (the product) goes, all I can get so far is that it’s going to be pretty rough on the stimulants. So, perhaps this wouldn’t be something that I’d recommend to people who are just starting out or people who are sensitive to caffeine and the like.

Their company is much too new to judge on that alone, so we’re going to be going a little deeper into this hell pit. In hopes that, by the end of it, we know whether or not the Chaos Crew Bring the Chaos will actually be worth the money that they’re asking for!

As mentioned previously, Chaos Crew goes pretty hard on the stimulants. That’s about the first thing that anyone will tell you. Which, to be fair, is not really all that uncommon in the world of pre workouts. But what else do we know about this UK-manufactured pre workout?

Well, they have two main ingredients, these are Eria Jarensis and DMHA. I’m going to tell you now… that doesn’t really make me all that excited. I’ll tell you why in more detail later on, but just know that those wouldn’t have been my first (or even second or third for that matter) choice.

Choice of main ingredients temporarily set aside. There are other ingredients used in the Chaos Crew Bring the Chaos that could potentially lift up my opinions of it. After all, much like most pre workout supplements, Bring the Chaos promises a couple of workout intensive benefits.

Will they be able to make do with their promise? Well, let’s find out! Next, we’re going to work on a thorough ingredient breakdown to unearth any possible sins that this company could have possibly committed! 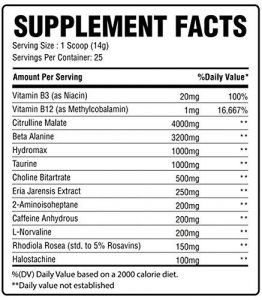 The first ingredient that we’re going to be covering, is a staple in most pre workouts. That is, caffeine! So, when Chaos Crew said that they pumped this shit in stimulants? They weren’t kidding! There are about 250 milligrams of pure caffeine alone (so far.)

It definitely boosts your energy for the gym. However, that’s a lot for some who are just starting out! Beware if so! You can check out potential side-effects in our side-effects section.

As one of the main ingredients in this formula, one wouldn’t be wrong to expect a lot from it. However, DMHA is actually an ingredient that is largely unfounded. By that I mean, there’s not much that we know about it right now.

The only thing that we do know, is the fact that it’s related to a banned substance that is connected to some rather horrible side-effects. You can check out potential side-effects in our side-effects section.

This is another one of the main ingredients. It’s also considered a stimulant, making it the third stimulant on our list. It also makes the second stimulant that is largely untested. I would definitely prefer some more research be done on this ingredient before I stake any claim on it.

With this ingredient we get something that is a little more tampered down. We were introduced to quite a bit of stimulants just now, and L-theanine usually works hand in hand with such ingredients. It allows you to focus on what you’re doing, and helps tack down the effects of the stimulants.

The last ingredient that we’re going to be covering is Beta-Alanine. It’s a staple in most pre workouts, it’s been proven to help you keep working out for longer periods at a time. The only thing unfortunate about this ingredient, is the side-effect that comes along with it (see more details down below.)

The Chaos Crew Bring the Chaos comes out pretty striking hot at its current price point! The company is asking for around 39.99 British Pounds or 53.46 US Dollars per container! That’s a premium priced product, selling for almost as much as the current number 1 in the pre workout market.

Side Effects of Chaos Crew Bring the Chaos

There were a couple of ingredients that we spotted in our ingredient breakdown that are known to cause side-effects. These include:

That brings our Chaos Crew Bring the Chaos Review at its end! We covered quite the number of subjects today, and all I can say is… It’s okay.

Bring the Chaos is, ultimately, not the worst pre workout supplement that I’ve seen. However, it definitely has a couple of things that it’s lacking as well. Whether it be ingredients or dosage. In that same vein, it would have been much better if they hadn’t included pointless ingredients like DMHA and Eria Janesis.

Either way, if you’re still looking to pump up your muscles and lose weight, then I suggest you check out our Top 5 Pre Workouts list!

The Chaos Crew Bring the Chaos should be able to provide moderate benefits. However, the use of unproven ingredients jacked up the price quite a lot.