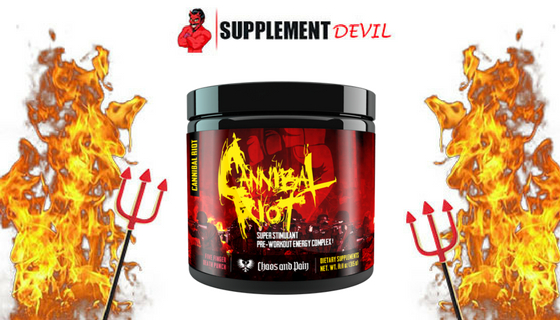 Our Chaos and Pain Cannibal Riot Review will be analyzing the hell out of a Pre Workout supplement. Too often these days, people are scammed our of their hard earned cash by supplement companies who deliver useless products. Prducts that they promise will work miracles, but in the end don’t do shit.

Trying to find a Pre Workout supplement that will work for you is a taxing job. one that not even the devil himself would be happy of doing. However, we here at supplement devil have decided to take on this laborious task to give you quality reviews that will open up your mind to the products that you are using.

This particular supplement is produced by a supplement company called Chaos and Pain. Not a bad name, we’re rather fond of burning hot benefits over here at SD, and with that title… Well, anything less than hellfire will be quite the disappointment.

Will the Chaos and Pain Cannibal Riot actually be able to provide? That’s the question we will be answering for you today.

HOW DOES CHAOS AND PAIN CANNIBAL RIOT WORK?

The Chaos and Pain Cannibal Riot is a Pre Workout supplement. Now, the general scope of a Pre Workout, is that it’s mean to help you train harder and longer. It provides vitamins and nutrients that push your workouts to the next level.

Of course, some companies will add a few bells and whistles into their formula, making it as unique as they possibly can. Now, from the outside in, the Chaos and Pain Cannibal Riot isn’t looking so bad.

It comes in a loud red and yellow container, that speaks to our devilish sensitivities They didn’t coward out with proprietary blends either. All the ingredients are expressed on the label, which means, that we can see exactly how effective this supplement can actually be.

Unfortunately, the formula itself doesn’t look so promising. There are many familiar names,but not all of them are names that we like seeing inside of the Pre Workouts that we analyze. Hopefully this is not as shitty as the first glance is making it seem to be. 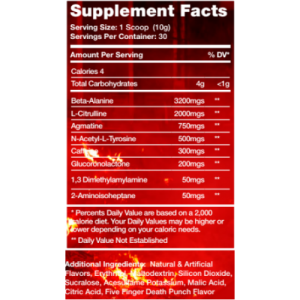 Caffeine is considered one of the best stimulants available in the market. It’s universally effective.

Beta-Alanine is an ingredient that is very popular in a lot of Pre workouts, however, that doesn’t necessarily mean that it’s any good. The ingredient is proven to work. However, it causes side-effects that turn a lot of people off. It’s harmless, but very fucking uncomfortable.

DIM is an ingredient that we often see inside of Testosterone boosters. This is due to it’s ability to balance hormones. It also slightly favors testosterone, allowing the testosterone levels inside of your body to increase.

Much like aforementioned ingredients, this is one that comes with a set of side-effects that you most definite would not want to incur. Fortunately, they were a little more careful and made sure that the dose was lower than the danger zone.

Getting the Chaos and Pain Cannibal Riot is easy as hell, one of the most recommended and trusted place to purchase this supplement is chaos and pain website. It prices the supplement at around $44.99.

SIDE EFFECTS OF CHAOS AND PAIN CANNIBAL RIOT

There are a lot of things in the Chaos and Pain Cannibal Riot that concerns us. Previous consumers also reported to have experienced all kinds of side-effects, and that is most definitely due to their poor choice in ingredients.

The Chaos and Pain Cannibal Riot is not the worst supplement out there, but it certain comes freaking close. It’s a Pre Workout in that it uses ingredients that we see in a lot of other Pre Workout supplements. However, as as far as the ingredients go…

Well, they’re definitely the best. A couple of them cause side-effects that are troublesome, and ones we would prefer to avoid. The solution also could have used some ingredients that will improve the quality of your pumps.

It’s lacking. The benefits are most definitely, mild at best. Which leads us to an easy conclusion. There are definitely better Pre Workouts out there.

Although there are mild benefits, the risk of potential side-effects, as well as the expensive price- makes the Chaos and Pain Cannibal riot a fairly bad supplement.