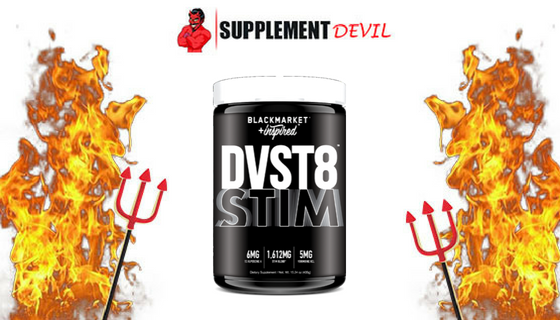 Hell is blazing with a fresh out of the factory Pre Workout Supplement! The one we’re covering for our Black Market DVST8 Stim Review is a little special. See, rather than be created by one company, this one was a collaboratory project between two well-off companies. One being Black Market and the other being Inspired.

Now, double-company or not. This Supplement will still be put through our hellish analysis. No backing out on this one folks, we’re going to be taking this deep into the underground. So, what’s with this stuff? How is it any better than the original STIM and DVST8?

I guess it’s pretty obvious by now, but the new product is a mix of both. Sounds exciting! So, why don’t we just clamber over and get on with our Black Market DVST8 Stim Review!

How does the Black Market DVST8 Stim work?

Frankly, I’m hyped. I’ve never heard of a collaboratory supplement before. Of course, that’s not necessarily going to make it better, but it certainly sparks some interest. Supposedly, both the DVST8 and the STIM had separate fields of specialty.

As such, the combination of both signifies a powerful mix of said specialties. The STIM prided itself on its energy-boosting and focus-boosting ingredients. The DVST8, on the other hand, was more for endurance and strength.

Now, if what they’re saying is true. Then we got ourselves one hell of a Pre Workout. If not? Then you can expect me to chuck this right into the pits. Got to say though, we’re not looking at a very good start. The Black Market DVST8 packed a shit ton of its ingredients inside a proprietary blend.

That means, that we don’t really know how powerful (or even dangerous) each ingredient is. Let’s hope that the ingredients will show more promise. 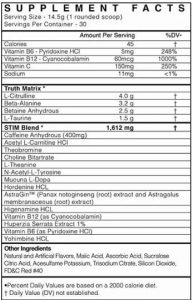 Citrulline starts off our list of its ingredients. Admittedly, it’s a pretty damn good ingredient. Research has linked it to the improvements of endurance and the reduction of fatigue. However, the Black Market DVST8 Stim is missing a couple thousand milligrams when it comes to dosage. A shame really, that makes it pretty much useless.

We get another classic Pre Workout ingredient. One that we see everywhere else. Fortunately, they have enough of it this time to work. So, you can expect increased endurance and a boost in lean muscle mass production. Unfortunately, there’s also enough here to cause potential side-effects.

This is an ingredient from the STIM blend, the blend hides almost all of its dosages. Funny enough, they’re pretty honest about their Caffeine dosage and that kind of scares me. You know why? Well, they have enough caffeine in here to make even the devil himself twitchy.

This is 100% going to cause side-effects. Especially for those who are non-regular coffee drinkers. So, they’re honest enough to tell us that they’re pumping a shit-ton of caffeine down our veins, but not enough to tell us about the other ingredients?

That’s frickin’ shifty if you ask me.

It’s pretty weird to see this here. Usually, Yohimbine is stuffed inside of Fat Burner supplements. After all, it’s known for its fat burning effects. However, even then I wouldn’t want to see it. Not with the potential risks involved.

Here we have yet another fat burner. A suspected fat burner at least, there’s not enough proof for us to say that it actually works.

Huperzine is a big nootropic. It’s used for stuff like improving memory recall or treating symptoms of depression — it’s strong stuff. But, if you use it too often (or any more than 1 month) you can expect to incur a couple of nasty side-effects.

The Black Market DVST8 Stim, as mentioned, is fresh out the market. They’re opening pre-orders on the 16th of May and selling it on their websites for around $44.99 per bottle.

There’s more than a couple of ingredients in here that can cause potential side-effects. Ingredients like:

That about does it for our Black Market DVST8 Stim Review. I gotta say, I had high expectations for this one. After all, this isn’t just one company, but two! Two veteran companies that could have done a hell of a lot more together than they did separately.

Okay, so the intent was there. They tried, they used some ingredients that work and that’s good. They should have stuck with that! If they had focused more time on proven-to-work ingredients, then we wouldn’t be here right now.

Either way, the Black Market DVST8 Stim can probably provide some benefits. However, I’m not planning to risk taking it myself — not with the potential side-effects.

It’s just not worth the risk when you need a product that’s guaranteed to deliver relentless muscle pumps, high energy and minimal side effects. If you want a side effect free, powerful, pre workout, check out our top 5.

Admittedly, the Black Market DVST8 Stim had potential and hype. However, they fell short when it came to some of their claims. They could have played it a little safer and cut back on some of the ingredients to avoid risky side-effects.