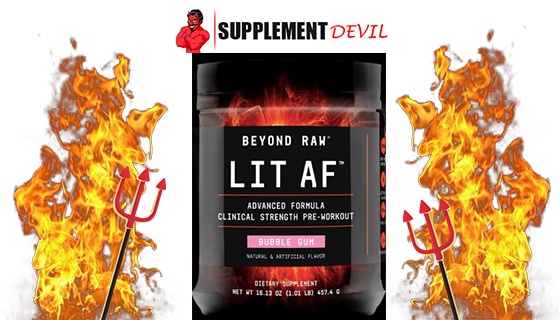 Beyond Raw Lit Pre Workout has become a damn successful pre workout from relatively new supplement company Beyond Raw. On the back of Lit’s success, the company has released Lit AF. A product that promises to be a clinical strength pre workout.

Safe to say, we’ve been itching to get our hands on it and get down for a HIRT session. Our Beyond Raw Lit AF review will take a scalpel to the full blend, and benefits this new iteration of the popular pre workout can offer.

Currently, you can choose from these Beyond Raw Lit AF flavors:

Some users have complained that the flavor is a bit too sweet and tastes artificial. Then again, other people didn’t mind the intense taste. It all depends on what your preferences are.

It looks like LIT AF is a product with a good set of pump enhancing ingredients in it. Featuring in the blend of Beyond Raw’s latest pre workout is citrulline malate at 8g and Nitrosigine at 1.5g, as well as 400mg of the performance ingredient Peak AT.

Lit AF’s formula weighs 19.70, but with filler ingredients it goes up to 24.26g. The Lit AF pre workout ingredients are part of a fully transparent list, just as was the case with the original Lit pre workout blend.

So with the intro out of the way, let’s start looking closer at the ingredients in Beyond Raw Lit AF to see what they can offer.

Citrulline is a staple ingredient in any pre workout. It helps by maximizing nitric oxide production, which leads to improved blood flow. (2) At 8g per serving, Beyond Raw did a good job at dosing this ingredient.

This is a love-it-or-hate-it kind of ingredient. Beta Alanine is known to cause paresthesia, a harmless side effect, but a very annoying one! It makes you itch all over your body which can be distracting when you’re trying to focus on lifting weights. (3)

In terms of effects, Betaine Anhydrous is somewhere between citrulline and beta-alanine. Although it’s not the strongest pre workout ingredient out there, it’s certainly not a bad inclusion here.

The good old creatine! This is hands down the safest and best choice for a supplement of this kind. It’s extensively researched, and besides improving muscle performance, it’s even good for your cognition.

Arginine isn’t one of our favorite pre workout ingredients because it has poor absorption in the body. However, Lit AF uses an inositol-stabilized arginine silicate, which in theory should improve bioavailability. We’ll need to see more studies confirming this before we can recommend it to our readers, though. (4)

Taurine is found in loads of commercial energy drinks. So it’s no surprise to see it included in Beyond Raw Lit AF formula.

ATP is made by your mitochondria, and is used for creating energy in the body. However, while it can help in the cases of overtraining, supplementing with ATP directly isn’t shown to be as effective as taking ATP ‘precursors’, such as creatine. (1)

This blend contains two different types of caffeine: 250mg of caffeine anhydrous and 50mg of ZumXR Caffeine. The idea was to provide a combo of fast-releasing caffeine, and slow-acting caffeine to help prevent ‘energy crashes’. But with the total caffeine dose being 300mg, you’ll crash nevertheless. Any more than 250mg is generally shown to be very aggressive and often ends up causing unwanted side effects.

This is a type of choline molecule. We’re more used to seeing this ingredient in nootropic supplements, because it’s more geared towards improving brain health. However, the dosage in Lit AF is too low for that purpose, so it’s a disappointing inclusion in any case.

Dosage (How to Take)

You should mix one scoop in a glass of cold water and consume Beyond Raw Lit AF before your workout. On non training days, you can take one serving for an extra boost in focus and mental energy.

One container of Lit AF comes with 20 servings. So if you lift five times per week, it will last you about four weeks.

The main issue with Beyond Raw Lit AF is the huge caffeine dosage of 300mg. The fact that it’s served as a drink just adds to the problem, because it’s harder to dose than capsules. Possible side effects include:

There’s also the chance of getting itches all over your body after taking beta-alanine. That said, some people aren’t bothered by it.

Is This the Best Pre Workout?

We don’t rate Beyond Raw Lit AF as one of the top pre workouts on the market right now.

It has some good ingredients but we think that the caffeine dosage is too high, Alpha GPC is underdosed, Beta-alanine causes itches, and the formula overall is missing a few core ingredients.

This brings us to the very end of our Beyond Raw Lit AF preview. On the whole, it’s a supplement with some great ingredients, many of which are essential in pre workouts.

But, it doesn’t quite score as one of the very best pre workouts on the market right now, as it contains a very aggressive dose of caffeine, as well as Beta-alanine which is known to cause annoying side effects.

However, if the high caffeine dosage and itchiness don’t sound too bad to you, then we suppose it could be a decent choice.