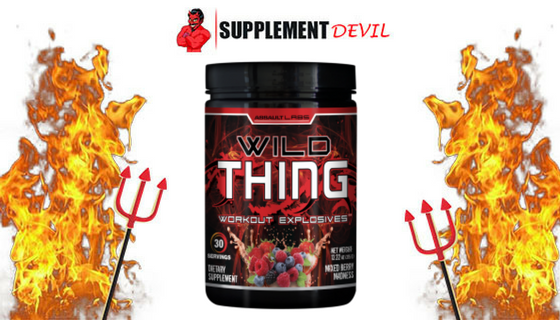 Our Assault Labs Wild Thing Review will be going through the benefits and demerits of the Pre Workout supplement called Wild Thing, which is manufactured by Assault Labs. The supplement is meant to provide the nutrients you need in order to get the most out of your workouts.

For a Pre Workout supplement, this is definitely one of the more popular ones. It is- for the most part, highly rated. A first glance at the ingredients will show why, but we’ll go into more detail on that later.

The company, or rather, supplement motto is ‘Start your Evolution.’ It’s catchy and holds a lot of promise, the promise of a better body and a better life. It’s also kind of shittily cringe, but what slogan isn’t?

This is ok…but what’s better?

The company really likes running on themes, because the product description continues on to describe its effects as an ‘evolution’ of today’s market, and you know what? If it actually can promise these supposed miracle-like effects. Then I’d be happy to get on my knees and praise our lord and Savior.

Devote myself for the cause, and whatever the fuck not. So let’s get to it then, why don’t we?

First of all, there’s a shit-ton of ingredients in here. An honest to god, shit-ton. There are 17 ingredients listed, which is a lot more than what I would have recommended.

Over this side of the hell pool, we care more about the quality of the ingredients than the quantity of ingredients. Quality is best. The more money spent on ingredients that actually work, the less money goes to waste on filler ingredients that does nothing for the body at all- or worse, brings out nasty side-effects that could have been avoided if they had just not been put it in.

Still, we’ll give the Assault Labs Wild Thing a chance and let the ingredients speak for themselves. 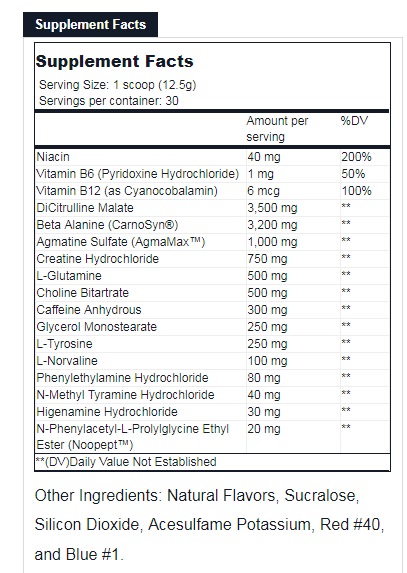 The highest dosed ingredient in the Assault Labs Wild thing is D-Citrulline Malate, and rightfully so. The recommended dose for D-Citrulline malate is around 3,000 milligrams a day, which makes the 3,500 milligrams inside of the formula- enough to be effective.

Anyways, so what is it about D-Citrulline that makes it an effective Pre Workout ingredient? Well, it’s like taking a sip off of a knock-off fountain of youth. It’s a non-essential amino acid that helps your body prep for the burn of workouts, allowing you to improve your pumps whilst simultaneously helping reduce fatigue and soreness.

This particular ingredient is a bit of a give and take. It’s not ineffective, that’s for sure. However, a lot of people would probably prefer to stay away from it. This is because of its effects on the body. Part of which has been said to benefit your level of endurance- keeping you at the gym gaining muscle and losing weight for longer periods at a time.

However, the other part is that it can cause a ‘tingly’ sort of sensation. It’s hard to describe until you yourself have felt it. It’s like crawling out of a hell pit full of bugs and whatever other nasty shit. It’s uncomfortable, and most people would prefer to not have to deal with that- even if it is completely harmless.

Another sufficiently dosed ingredient in the Assault Labs Wild Thing solution is the Agmatine sulfate. It’s proven effective at doses that range around 500-1,500 milligrams, which means the 1,000 inside of the Wild Thing supplement more than efficient.

The only thing is, whilst it is known to affect one’s nitric oxide levels in a positive way- allowing for better pumps and longer workouts. More research is needed to establish how exactly that is done, and how much more- or less effective it is than other ingredients.

Creatine is a well-researched ingredient that is mainly used for it’s known ability to help increase a person’s strength and lean muscle mass. It’s common in a lot of supplements and is known to be sufficiently safe- as far as taking it in small amounts.

However, there are known side-effects involved when consuming Creatine in large amounts, or without the accompaniment of water. Small separated doses are better throughout the day, to avoid stomach cramps, diarrhea and nausea.

Although it is commonly used by many vegans, vegetarians, etc. to help them meet their daily protein needs, it has actually not “proven to enhance muscle building in healthy individuals.”

This is one of those fucked up ingredients, that we are more than happy to recommend that people avoid. First of all, studies have been inefficient as far as how effective is. And Second of all, it can have you smelling as if you had just climbed out of fish-hell.

Basically, your breath and your sweat will begin to give off a fishy-odor that just clings to you all day. Unfortunately not even holy water can wash off this scent, as it originates from the inside- as the Choline dissolves and is digested.

You can find the Assault Labs Wild Thing going for around 34.95 US dollars. Which is admittedly just a little bit off the average price, but definitely less than what other supplements are asking for.

The thing is, this is a pretty fucking good supplement- if, it weren’t for the side-effects involved. A couple of things you’re going to have to be wary of:

The situation with Assault Labs Wild Thing is little messy. We cannot say that the supplement will not work, because it does use a couple of ingredients that should provide adequate muscle pump benefits and what not. However, a couple of the ingredients are useless- and others cause nasty side-effects that you would probably want to avoid.

It’s not the worst, that’s for sure, but there are definitely better supplements out there. The price of this one, is admittedly tempting, but it’s always better not to settle for anything but the best when it comes to intense muscle pumps and incredible performance .

Verdict description - The ingredients in the Assault Labs Wild Thing are sufficiently dosed and should provide muscle pump benefits that will help you gain muscle and lose weight. However, there are accompanying side-effects that one would probably prefer to avoid.