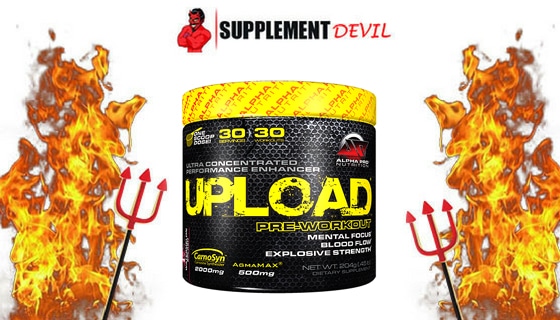 Looking for something to pep you up for the gym? Check out our Alpha Pro Nutrition Upload Review to see if this pre workout supplement is the one for you! In this hellish breakdown, we’re going to be analyzing anything and everything there is to know about pre workout supplements and why this one received the rating that it got.

So, let’s start! What should we look in first? The first thing is outward appearances. The company that produced the upload is called Alpha Pro Nutrition. This is an old-timey supplement company that has been around for quite some time now.

In fact, we’ve even reviewed a couple of their other stuff. Which (spoiler) didn’t end up being all that great. Despite that, we’re back on checking out this formula. Because even though the previous review had not gone so well, there was something to be said about their insistence on fairly cheap prices.

Will this pre workout be their winning glory? Let’s find out in our Alpha Pro Nutrition Upload Review! Give it a scroll! We have our official rating (and the reason thereof) down below.

How does the Alpha Pro Nutrition Upload work?

Right off the bat, we’re going to be looking into how effective the formula for the UPLOAD is. Will it be something to look out for? What should we expect? Well, based on our preliminary first-look. There are a couple of things about this pre workout that doesn’t necessarily sit right with me.

First off, the servings and the taste, those look okay. For a pre workout, I never usually have to worry about how much you take (unlike a fat burner supplement.) The Alpha Pro Nutrition Upload doesn’t stray too far from the usual either — 1 scoop mixed in water taken 15-45 minutes before physical activity.

So that’s okay. The messed up part, is the existence of proprietary blends. These blends are just a general nuisance. It’s a tactic employed by companies who don’t want to be honest with the amount of each ingredient that they use (hence making it impossible to know whether any of said ingredients would even work.)

Yeah so, not a good start. However, let’s hope that this can pick up in the next part of our Alpha Pro Nutrition Upload Review! That is… the ingredient breakdown! 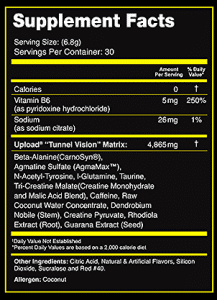 The first ingredient listed inside of the blend is beta-alanine. This to me is not so surprising. Beta-Alanine is commonly used inside of a lot of pre workouts. This is due to its ability to help stave off fatigue (keeping your workout out for longer periods at a time.)

However, there is a catch. This ingredient also comes with a rather annoying side-effect (see side-effect section down below.)

Much like the previous ingredient, this is something that is popularly used inside of pre workout supplements. Unfortunately, its popularity is largely unfounded. Research thus far has not found any significant results that prove its effectiveness.

Another popular pre workout ingredient is caffeine. This is the pep-up, so to speak. It’s the part of the formula that provides energy. Unfortunately, it also comes with a couple of uncomfortable side-effects (see side-effects section down below.)

The last ingredient of interest is the Rhodiola. This is something that has been suspected of providing benefits that can help you stave off the effects of fatigue (much like Beta-Alanine.) However, much like Agmatine, these benefits are largely unfounded.

It would have been better to exclude something like this in the formula. Especially when there is a wealth of other ingredients that could have been used instead.

As mentioned in the beginning, Alpha Pro Nutrition has a tendency of creating fairly cheap supplements. That doesn’t change here. The UPLOAD officially sells for around 29.99 US Dollars, which is right at the average price for most pre workout supplements.

There are a couple of ingredients inside of the Alpha Pro Nutrition Upload that is a cause for some concern. For the most part, these concerns are based on the lack of dosage information. Meaning, we don’t know whether the following ingredients were overdosed or underdosed.

This is the part of our Alpha Pro Nutrition Upload Review where we round of our thoughts. Mainly, we try to figure out whether a product is hot enough to survive our hellish standards.

The UPLOAD didn’t necessarily do all that bad. I say it’s about average, which works for its price. It might help you, and it might not — it really all depends on what they’re hiding behind that blame. A shame too, because they had a couple of good ingredients in there (mixed with a couple of useless once, but still!)

They certainly tried to make a good pre workout, and this shows. However, as to whether or not this is something that I’d recommend to people… Well no, it is not. Mostly because it’s not something I would personally use.

I’d prefer something stronger, something that will really get me going in the gym. The UPLOAD can’t get me that, but there are supplements that will! Check out our Top 5 Pre Workouts list to learn more!

The Alpha Pro Nutrition Upload could have deserved a higher review. We can't say for certain, because most of its ingredients are inside of a blend.