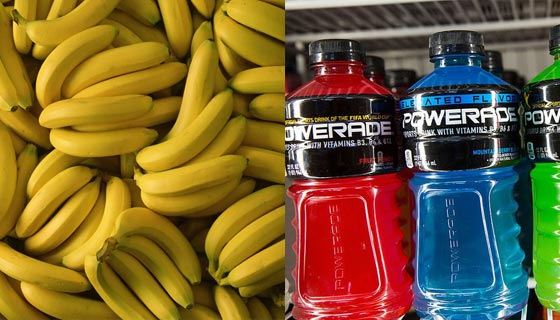 Bananas More Effective (and cheaper) than Sports Drinks for Athletes

If you exercise in any way, then you know probably know the importance of carbohydrates to fuel your performance. Especially if you do any form of distance training.

The role of carbs is to rapidly fuel the muscles using sugar. A study conducted a few years ago found that consuming a sports drink over a drink of water during strenuous exercise would lead to less inflammatory markers in the blood. Meaning performance levels and recovery improved.

Now, in the recent experiment [1], researchers tested a team of cyclists using a 75km bike ride. Count me out. But I’m glad someone did it for science.

The analysis used 20 mixed volunteers, and each had to complete four 75km rides. All the rides would let the subjects drink water, which I’m sure they are thankful for. But two would also include a sports drink or a banana as added fuel.

Participants were given half a banana every 30 minutes during the exercise. Which isn’t always convenient if you’re running, as eating can make you feel a bit sick and the participants did report this feeling too.

Blood tests were taken before, during and after the workout. When the researchers screened these bloods they found nothing new.

The sports drink and banana’s carbohydrates had helped reduce markers of inflammation in the cyclists. Showcasing they do benefit performance and recovery as expected and already proven.

However, when the researchers looked into genetic differences they found that the banana was working in a similar way to ibuprofen to help reduce the amount of an enzyme called COX-2.

COX-2 is a precursor to prostaglandins which are responsible for building up levels of inflammation. Ibuprofen works to block COX-2, which is why it’s good at helping to reduce swelling.

The study concludes that; “…these data support the combined intake of sugars and phytochemicals from banana fruit by athletes during heavy exertion as an efficient strategy to improve metabolic recovery and diminish post-exercise inflammation at the cell level.”

So, if you’re sick of being ripped off by bottles of glorified coloured sugar, then maybe, if you can cope with the bloating, giving a banana a go during long periods of exercise might be for you.

I just don’t find a 75km cycle aPEELing enough to try it.