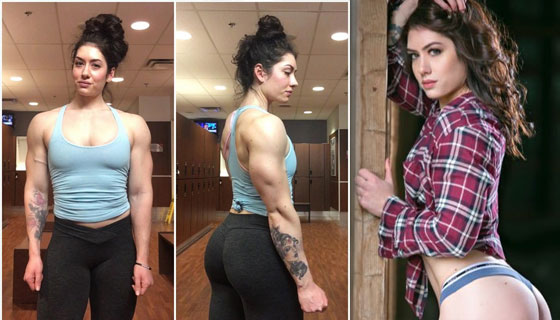 Natasha Aughey is a fitness icon, sponsored athlete, and highly popular social media star who hails from Ottawa, Ontario, Canada. Thanks to her dedication to fitness, she’s not only built an enviable physique, she has also been able to build an ever-increasing online fan base too. At the time of writing, she boasts around 757k followers on her Instagram page.

Natasha’s interest in fitness isn’t such a recent thing either, as she played a variety of sports throughout her high school years, including the likes of soccer. As well as this, she followed a healthy lifestyle too, regularly attending the gym. However, she failed to make the progress that she desired despite her best efforts. At that moment in time, the majority of her training in the gym consisted of cardio only.

Eventually, after taking advice from those around her in the gym, Natasha began to lift weights on a regular basis. Thanks to her excellent genetics, it wasn’t long before her hard work paid off – forming the foundation for the incredible physique that she’s now famous for.

Ever since she began to share her progress online back in 2013, it didn’t take long for Natasha to soar to fame online. She’s even reached the bodybuilding stage in the 2013 OPA Ottawa Championships, where she was able to finish in sixth place. More recently, she has become a qualified personal trainer, earning a CanFitPro qualification at level 1. As well as this, she now sells her own training and diet plans via her website Glutes, Guts, and Glory, which allows Natasha the chance to help her clients achieve the physique of their dreams, just like her. 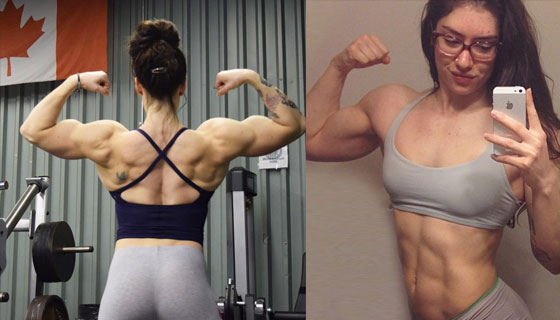 Natasha follows a workout plan that involves working out six days per week, taking only one rest day. Over the years, she’s found that this is the most effective workout regime for her to continually obtain her fitness goals. Whilst she’s known for having excellent genetics, which undoubtedly allowed her to build significant muscle mass over the years, it’s her hard work and dedication, and staying consistent with her training and diet that’s delivered results.

In terms of her weightlifting plan, Natasha likes to keep her reps low, focusing on lifting heavy weights. This is opposed to lifting lighter weights with a high repetition range. Here’s the plan that Natasha follows:

Just take a look at this video of her training in the gym, and you’ll just know how hard she trains every time she steps foot into the weights room: 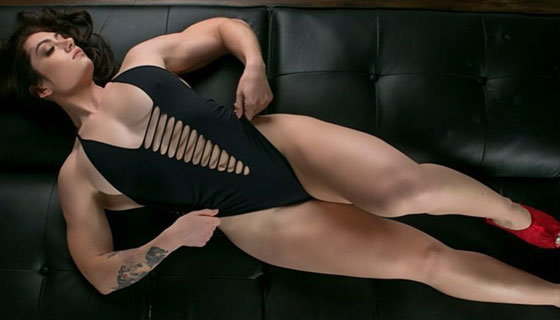 Natasha follows a diet that allows her to continually build lean muscle mass. While the majority of her diet choices are lean proteins, complex carbohydrates, and healthy fats, Natasha likes to experiment with different recipes – creating healthier versions of so called ‘cheat foods’. However, from time to time, Natasha will indulge in a cheat meal in order to reward her hard work in the gym. One of her favourite bodybuilding meals is chicken, rice, and vegetables.

Want to build, tone and balance like a pro?

As well as following a mostly ‘clean eating’ diet, Natasha also likes to make use of supplements in order to fuel her workouts and recover quickly from her intense lifting sessions. Her favourite supplements includes the likes of:

Natasha Aughey is a blooming star. She got her start for exercising at a pretty young age. She was into cardio exercises when she had been young, and the cardio steadily moved on to encompass gym work.

Now, she’s not only rocking this devilish figure of hers, but she inspires other devilettes to do the same. She regularly posts on social and media and has become quite an influencer for a girl so young.

Natasha Aughey is not a stickler for a strict diet regime. There are some people who need to count macronutrients and to limit themselves to certain types of food, but Natasha isn’t one of them.

For her, eating is a natural occurrence. She does make sure to stick to foods that are clean and are packed with nutrients, however she’s not so strict that she has a meal plan that she follows every week.

The fact that she cooks makes this whole experience a lot simpler for her as well. She can make the meals that she wants, knowing what ingredients she can put in to make it healthy but still delicious.

Her favorite meal just so happens to be chicken and rice, which is a good source of not only protein but carbs and fats as well. She partakes in the occasional cheat meal, which is not as much of a sin as most people make it out to be, and is all the more happier about it.

As for the Natasha Aughey workout routine. Well, once again it isn’t as strict as some other people. She had started out doing a lot of cardio. Which is good for losing weight and burning calories, but not so good for the figure.

Doing too much cardio keeps you lean, but it didn’t give Natasha the curves that she so desired. As such, she began to talk to people about how that could be done. With this, her love for weight lifting was born.

Nowadays, she’s rocking this sculpted body that serves as an inspiration to the people that follows her. You can check out her progress on Social Media platforms like Instagram. She also posts on Youtube every now and then with educational info that you wouldn’t want to miss.

Anyone who wants to have that kind of sculpted body is bound for some hellish workouts. People take supplements in order to buffer some of the damages, and ease the way. They’re not there to magically give you abs and a lean bod, they’re there to supplement your journey.

Natasha Aughey takes quite a few that are meant to help pump up her game in the gym, here are a few of her favorites:

How To Use Protein Supplements