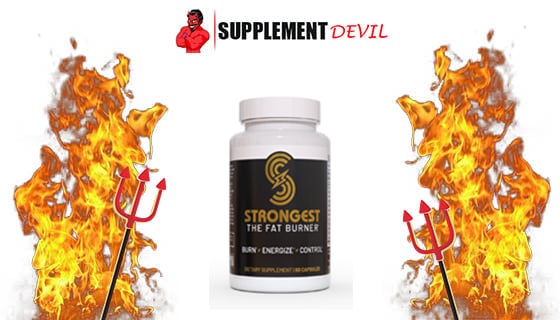 Strongest is a fat burner that claims to work where others have let you down. It’s a fairly advanced product, that some might say is at the ‘hardcore’ end of the fat burning spectrum. With a high stimulant dose and fairly advanced ingredients, Strongest certainly looks strong when you consider it’s formula. But what about it’s effects?

The product looks to sort of stand on it’s own, with it’s own design and look and feel to it amongst their other products. It uses 10 ingredients, some completely natural and others natural derivatives to provide a vary wide range of effects, all based around burning fat.

It’s simple to order and also has multi buy discounts. You can order Strongest here.

A word of caution, this is a fairly Strong product as the name would suggest. So we don’t really recommend meant it for people who are completely new to fat burners.

Ingredients in Strongest are Strong…but also this product will be highly effective for those serious about cutting unwanted fat.

It’s a mix of thermogenics, stimulants and appetite suppressants that can impact the fat burning process at a cellular level by optimizing the way your body uses stored fat as fuel. As well as preventing the storage of even more fat.

We’re starting with the big one here. Strongest contains a fairly high 250mg of caffeine per day. Which will provide you a major boost to energy levels whilst in a calorie deficit and should also boost your metabolic rate.

This ingredient can help prioritize fat to be metabolized as energy. But L-Carnitine can also greatly improve mental function leading to improved performance.

White willow works to help balance out the other ingredients in Strongest and can help enhance the thermogenic properties of the green tea and cayenne. Ensuring a more effective increase in calorie burn.

A crucial neurotransmitter that has a lot of impact across your body. PEA as it’s known can aid focus but also play a big role in reducing your appetite.

Increases the number of easy to metabolise brown fat through it’s ability to trigger the conversion of adipose fat tissue (white fat).

This helps increase daily energy expenditure and burn through fat quicker as you are cutting.

Cayenne turns the heat up in your body which causes a cooling reaction. This in turn requires energy in the form of calories. Cayenne is a pure thermogenic.

Theobromine is found in high amounts in dark chocolate and can increase daily energy expenditure and also block more fat being absorbed or stored. It’s also thought to improve the rate at which fats are burned as fuel.

This is the precursor to L-Carnitine in the body and after ingestion is converted into it. Helping it have effects on brain performance and metabolic rate.

Is a supplement which can impact metabolic rate and also help improve workout performance.

Strongest is fairly straight forward to use. With 2 capsules per day to be taken with water. We’d recommend due to the caffeine, taking one just after breakfast and one just after lunch. This will avoid the green tea’s tannins making you feel nautious. Alternatively, you could try taking 2 capsules before a workout. However this could be a fairly strong way to use this fat burner.

We’re impressed to see so much go into each capsule of Strongest and realistically you shouldn’t experience any side effects other than make some slight caffeine jitters.

Strongest costs $52.00 per bottle, which is a 60 day supply. This is pretty average when compared with other fat burners out there, and actually represents good value for a fat burner with such a sold and wide ranging formula.

Overall Strongest is a strong fat burner, but one that doesn’t just rely on stimulants or any particular single effect. Strongest has multiple active ingredients, each which play a role in the breakdown of fat, the storage of fat and your energy levels while in a calorie defecit.

It is one impressive product, and might not be for everyone, but National Bodybuilding Co. have certainly created something which will be a must have for bodybuilders looking to cut fat fast.