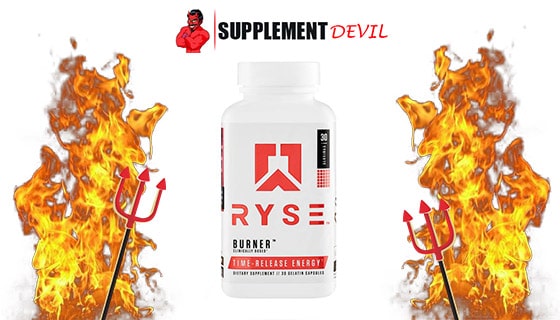 When it comes to losing fat, the best place to start is to exercise regularly, follow a healthy, balanced diet, and ensure that you’re in a calorie deficit. However, if you’re looking to go a step further and kick your fat burning potential into overdrive, then a fat burner supplement is a great option.

The problem is, there’s so much choice out there. This means that you could end up buying s**t that just doesn’t work, or simply get ripped off if you don’t do your research.

Our Ryse Fat Burner: Time Released review looks into just one option which is currently available on the market. It is made by Ryse, a company which was founded in 2017. They happen to have other supplements in their range too. This includes Ryse Test Boost and Ryse Loaded Protein.

So, let’s not delay things any further – it’s time for you to find out everything you need to know in our full review of Ryse Fat Burner: Time Released.

First impressions of Ryse Fat Burner: Time Released are good. We’ve taken a look at other products in their line up previously. It’s safe to say that we were always impressed when it came to ordering.

However, their website could be improved by providing a more in-depth look at the ingredients and the benefits of the product.

What Will Ryse Fat Burner: Time Released Do?

Ryse Fat Burner: Time Released is a fat burner supplement that claims to focus on long-term burn. Time released caffeine ensures that your appetite will be suppressed throughout the day. In turn, this ensures that you’ll be far less likely to snack unnecessarily.

That’s not the only benefit of this particular supplement, though. The inclusion of caffeine also ensures that you’ll feel energized for a long period of time after consumption. Low energy is a common occurrence when in a calorie deficit. So, this is an ingredient which helps to combat this. Only 1 capsule needs to be taken per day. Therefore, one container will last you about 1 month.

It is best to stick to the manufacturer’s guidelines too. More definitely isn’t better when it comes to fat burner supplements. They’re not a magic pill which will allow you to burn an insane amount of fat overnight. These things take time! So, don’t be tempted to take any more than one a day.

As the name suggests, caffeine within this particular fat burner is designed to be ‘time released’. This means that after you consume the product, you’ll not only feel energized, you’ll also have a suppressed appetite too. In turn, this stops you from snacking unnecessarily.

Theacrine is an ingredient that is a naturally occurring chemical similar to caffeine. However, there is insufficient evidence to suggest that it is beneficial for mental and physical performance and fighting fatigue.

This is an ingredient which can help improve your cognitive functioning. However, it is a compound that can cause unwanted side effects such as a headache, insomnia, and nausea in certain individuals. In addition to this, there haven’t been many studies conducted on this particular compound. For that reason, there is insufficient evidence to suggest that it is beneficial.

This is an ingredient which has various uses. One of which is aiding weight loss. This is due to its thermogenic properties which raise the core body temperature so the body dips into your fat stores to regulate your body temperature.

Sometimes, side effects can occur when certain ingredients in fat burners are used. But, it is important that everyone’s body reacts differently.

We were able to avoid any notable side effects during use. But, this might not be the case for some people. So, be sure to stick to the recommended dosage of 1 capsule per day.

At a cost of $59,99 at the time of writing, Ryse Fat Burner is undoubtedly one of the most expensive options available on the market. You can purchase the product directly from the website of the manufacturer.

Some of the ingredients which are included within Ryse Fat Burner: Time Released ensure that you’ll remain energized for a long period of time.

However, there are some notable ingredients which aren’t included in this particular fat burner supplement. This includes the likes of green tea extract, glucomannan, and cayenne pepper seeds – all of which are scientifically proven when it comes to fat burning.

For that reason, we’d definitely recommend that you look elsewhere if you’re in search of an effective fat burner that packs a real punch.

When it comes to Ryse Fat Burner: Time Released, we like that there are some great ingredients included which are dosed effectively  – predominantly caffeine. In addition to this, there are no proprietary blends used.

However, proven ingredients such as Green Tea Extract, Zinc, and Piperine weren’t included in the product. This meant that we were able to get better results with alternative products.

If you’re not sure on which product is right for you, then you can take a look at our other reviews of fat burner supplements by visiting the following link.

You’ll be able to weigh up your options and make a decision on which fat burner which suits your needs best. Remember, it always pays to do your research!