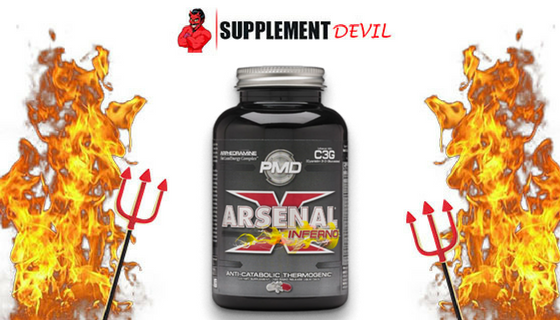 In our PMD Arsenal X Inferno Review, we will be going through a fat burner product that has been said to promote Thermogenic weight loss effects.

Thermogenic products are meant to burn your body up from the inside. Not in the way that hellfire does, but a subtle burn. One that gets the engines revving enough to help you lose that pesky little bit of excess fat that clings on despite whatever diet or exercise regimen you try out.

The product is called Arsenal X Inferno, and it is produced by a company called PMD. They’re a pretty well established brand, and they pump out products like the devil pumps out hellhounds. Unfortunately some of those products are not so vicious, and end up being more akin to the decorative little chihuahuas a lot of celebrities carry around like purses.

Is the PMD Arsenal X Inferno going to be their breadwinner? Well, read on to find out.

PMD Arsenal X Inferno, it is a big name, not a bad choice. However, not everything they do is a particular good choice. In fact, they make a couple of fucked up choices. They categorized all their ingredients into three different proprietary blends.

Proprietary blends are most commonly used to hide the effectiveness of the ingredients used inside of it. Each and every ingredient is marked out, so we’re not going to be stopping our analysis here.

However, this is an immediate red flag, that turns us off greatly in regards to taking this supplement. 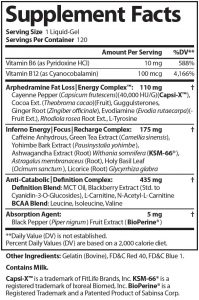 Cayenne is a good thermogenic ingredient, definitely a good choice on their part. One that research has shown to have some effectiveness, especially in regards to reducing the rate in which your body absorbs sugar. Doing this will help keep you from gaining as much calories.

Several studies has resulted in minimal cholesterol reduction. However, this has not been duplicable. The ingredient has shown some promise with the betterment blood flow in some preliminary studies. Unfortunately, this is more promising as a Pre Workout ingredient than a fat burning one.

A traditional spice that is popular in a lot of Asian cooking. It has been believed to reduce nausea and ease indigestion, and there was a study that suggested that it might be an effective T-booster ingredient. However, even that study had been very limited and needs some repetition.

An effective nootropic ingredient that is also known to boost muscle gain by reducing the effects of fatigue. The fact that it is in the PMD Arsenal X Inferno does not make sense, as it has not been known to provide any fat burning effects.

There is a total of 170 milligrams in the proprietary blend that the Caffeine belongs to. Which would strongly that the caffeine inside of it would be wholly ineffective. As Caffeine is often taken in doses of at least 200mg.

Green tea is another good metabolic ingredient that was short-changed in this small-ass blend of theirs. Especially as studies have shown it to be most effective at doses of around 400-500mg.

Yohimbe is closely related to Yohimbine, which studies have shown as an effective fat burner ingredient. However, it comes with a set of rather nasty side-effects, and is contraindicated with a lot of other medications.

An ineffective T-booster ingredient, that research has shown to decrease cholesterol levels significantly. There couldn’t possibly be enough of it in the PMD Arsenal X Inferno solution to be effective as the lowest most effective dose is around 300-500mg. Whilst, the prefered dose is around 6,000mg a day- divided three times throughout the day.

With 120 pills per container, and 3 servings per day, the PMD Arsenal X Inferno should last you for around 45 days. It costs around 58.95 US Dollars per container, which is a little more than your average price, especially considering the overwhelming amount of ingredients that are probably underdosed.

This supplement is liable to cause some uncomfortable side-effects, and due to the ingredients being inside of proprietary blends. We cannot be certain which ingredients are under or overdosed.

This is altogether quite an underwhelming. The name inferno had me at fire and brimstone. However, I was gravely disappointed. Not only are all the ingredients inside of fucking proprietary blends, but a great many of the better ingredients are in blends that couldn’t possibly be enough for them to be effective.

PMD also used Yohimbe, which is a problematic ingredient that is likely to cause you more trouble the help. It’s all together a pretty shit fat burner supplement. Especially with the price that it is being sold at.

Although the PMD Arsenal X Inferno chose some pretty good ingredients, a lot of them are underwhelming underdosed and stuck inside proprietary blends. For the price it is selling, they could have spared more attention on dosing the ingredients.