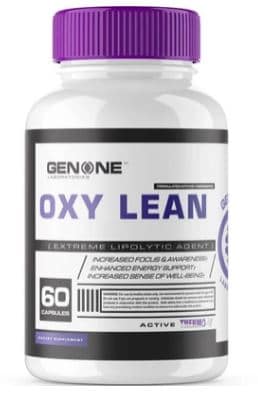 Genone have renamed it as Oxy Lean but we’ll continue to refer to it as Oxy Shredz for convenience.

They claim that Oxy Shredz gives you:

These are enticing claims so let’s see if they’re true, shall we?

“To contribute to the global fitness community by creating a a movement based on positivity, progress and pushing yourself to the limit”

Here we’ll tell you both the good and the bad aspects of Oxy Shredz.

The good points of Oxy Shredz:

The bad points of Oxy Shredz:

The proprietary ingredients in Oxy Shredz are not a great start.

Here’s a list of the active ingredients in Oxy Shredz, together with explanations of what they do for you:

Caffeine kick-starts your metabolism which helps you to burn fat. It also provides extra energy which is valuable if you’re eating fewer calories.

Caffeine is an outstanding ingredient, and it’s found in a lot of fat burning supplements.

It also gives you better focus and helps you burn calories

For best fat-burning results, you need about 200mg per day. However, more caffeine than this could give you undesired side effects.

Unfortunately, the caffeine in Oxy Shredz is in the proprietary blend so it’s difficult to know how much is in it.

Bacopa Monniera is a nootropic. Nootropics help improve your memory.

Its properties are most effective when you take a dose of 100mg or more per day.

However, because the doses aren’t indicated on the Oxy Shredz supplement fact sheet, it’s difficult to tell how much Bacopa Monniera it contains.

Bauhina L. is a flowering plant which has various uses in herbal medicine.

Its fat-burning benefits have not been proven, however, so it’s kind of a mystery what it’s doing in Oxy Shredz.

Rauwolscine has aggressive stimulant properties. It helps you burn up your fat stores for energy.

It can cause side effects, such as dizziness and anxiety, and its long-term effects are still a mystery because not enough research has been carried out.

Maybe that’s why Raulwolscine is banned in several countries.

This oil is extracted from geranium flowers.

It’s another ingredient which appears to be wasting space in Oxy Shredz Elite. Most of the few studies carried out on geranium oil found that it has little or no effect on fat burning.

Selenium is an antioxidant. It assists with your physical strength, invaluable when you’re cutting the calories you consume.

Selenium doesn’t have any direct fat-burning properties, but it helps you avoid oxidative stress and the properties mentioned above makes it a worthwhile supporting ingredient in any fat burner.

Magnesium increases your testosterone levels, which helps you burn fat.

If you have more testosterone you will build more muscle. And more muscle means a faster metabolism.

We can’t tell the amount of magnesium in Oxy Shredz, though, due to its sketchy supplement facts. But you need about 400mg of magnesium daily to see any benefit.

Niacin (Vitamin B3) is often included in multivitamin supplements.

It helps to regulate your LDL (“bad”) cholesterol, but it can also cause insulin resistance.

During insulin resistance your body cannot burn excess fat and it stores this fat around your belly.

Insulin resistance is a factor in both diabetes and high blood pressure.

The side-effects that Oxy Shredz may cause you include:

We can’t tell how much caffeine is in Oxy Shredz due to the vague supplement facts. It could be absolutely jam-packed with caffeine to give the impression that it’s more effective than it is.

Oxy Shredz also contains Raulwolscine, which, when combined with caffeine as it is here, makes an unsafe combination for side-effects.

Most of the other ingredients seem fairly safe, they just aren’t amazingly effective.

How to Take Oxy Shredz

Genone Labs advise that you should take three capsules of Oxy Shredz once a day.

The problem here is that the dose is too infrequent.

With the best fat burners you take them three to four times a day, so the effects don’t wear off after a few hours.

As the dose is three capsules per day, a bottle should last you about a month.

A bottle of Oxy Shredz is fairly reasonably priced compared to other fat burners.

However, we’re a bit wary of recommending Oxy Shredz as good value because of the combination of caffeine and Rauwolscine.

It’s also difficult to gauge the amounts of the ingredients in the proprietary blend.

Oxy Shredz is missing a lot of good ingredients for a fat burner and it also has that over-intense combination of caffeine and Rauwolscine.

We also don’t feel we can trust this supplement, with its proprietary blend hiding the amounts of the ingredients.

Oxy Shredz also contains a lot of ineffectual ingredients such as Bauhinia and Geranium oil. We can’t see what use they’re doing here.

Some of the ingredients in Oxy Shredz may increase your metabolism slightly, but not many of them help to actually break down your fat reserves.

There’s not much being offered in the way of appetite suppression either.

If you ask us, we’d recommend that you spend your hard-earned dough on one of the better fat burners out there.

However, if you want to try it, you can buy it from Genone Labs’ website here.