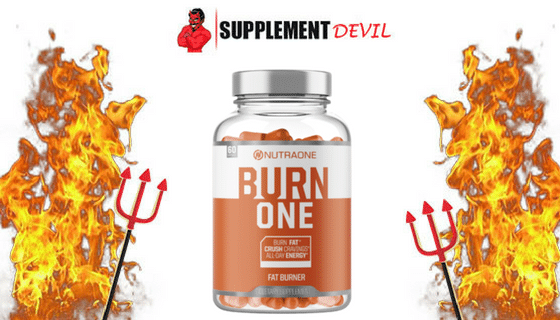 Today, we’re going to be introducing you to an old-timey fat burner in our Nutraone Burn One Review. More and more new fat burners crop up these days to flood the already flooded supplement market, but have you considered something a little more classic?

If you’re looking to try out something original, then you might be interested in the products produced by the Nutraone company. This company produces a shit ton of content and has been doing so for years.

You would think, at that point, that they would have enough experience to overtake any and every competition. However, that remains to be seen! We have checked out some of their products before (no luck), but perhaps our Nutraone Burn One Review will introduce us to the one.

Only the devil will be able to decide in this case! Faced regularly with the flames of hell, we’re going to be looking for something that will torch the competition. Anyways, enough with the babbling! Let’s get on with our review!

How does the Nutraone Burn One work?

The first thing we’re going to be talking about is the how. How does Nutraone expect their Burn One formula to work, and why would you (as a customer) buy it? Well, for one, they promise the usual things. They call the Burn one their ‘ultimate fat-burning agent’ and claim that it will keep you active, suppress your appetite, and boost your metabolism.

All of that, is not surprising. We see the same kind of promises in the current #1 fat burner the Instant Knockout. However, Nutraone is a lot more secretive about their formula than what I would personally prefer. By secretive I mean, they use proprietary blends in their formula.

In fact, the whole formula is overtaken by a singular blend. This whole blend totals to about 700 milligrams worth of ingredients (which is on the low-side.) The reason why this is bad, is because this prevents us from knowing how much of each ingredient is inside of this formula.

So, whilst they have a ton of ingredients listed, it’s unlikely that any of these are correctly dosed. Some might overdose (leading to potential side-effects) and other under dosed (making them useless.) Let’s talk more about that in detail as we move on to the next portion of our Nutraone Burn One Review… the ingredient breakdown! 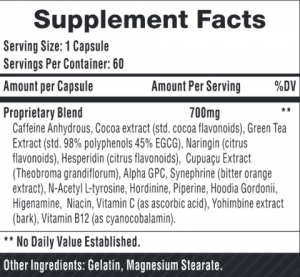 The first ingredient listed in the blend, is caffeine. Not surprising, especially when you consider how Nutraone seemed adamant in choosing the most popular of ingredients. This ticks off one of their claims too (if we assume that it was properly dosed). Specifically, the one about energy-boosting.

However, as mentioned. Because it is inside of the blend, we don’t know if there’s enough or too much of it. Which makes it a very dangerous ingredient (see side-effects down below.)

The next ingredient of concern is Synephrine, also called Bitter Orange Extract. This is an ingredient that has been tied to several nasty side-effects (see side-effects down below) and is actually banned in some countries.

Nevertheless, we do still see it in the occasional fat burner supplement for the fact that it is able to provide minimal fat burning benefits.

Our next ingredient of concern is Yohimbe. It’s another ingredient that has been shown to provide minimal fat burning benefits. However, much like the previous ingredient (synephrine), this has been tacked with a couple of nasty side-effects. It’s also been said to react negatively to other medication.

The last ingredient we’re going to cover, is Niacin. This is actually fairly popular in its own right. Mostly, because it has been proven to help improve levels of cholesterol. Unfortunately, the recommended dose is a lot higher than what can possibly be allocated (with the 700 mg overall dosage). So, you can count this as effective but under dosed.

As mentioned, we’ve had a look at Nutraone’s other products before. One, in particular, had been horrendously overpriced. So overpriced that it was practically sinful. Unfortunately, that opinion remains even here. Because they’re asking around 59.99 US Dollars per container!

That is a heck of a lot of money, especially when you consider the fact that you have no idea what you’re getting (because of the prop. blend.)

Side Effects of Nutraone Burn One

There are a couple of ingredients here that are cause for some concern. We cannot be certain whether these will be dangerous or not, however, you can still expect one or two of these side-effects:

●     Caffeine — can cause jitters, energy-crashes, and insomnia

●     Synephrine — can increase the risk of heart attacks and stroke

That brings our Nutraone Burn One Review to a hellish close. Well, actually, not so hellish. There wasn’t really anything about the Burn One that particularly excited me.

It was a lot of the same thing. You know, good ingredients stuffed inside of proprietary blends that no one has access to. Which, ultimately, made the whole thing rather useless. As we don’t know whether there’s enough in there for it to actually work.

So yeah, whilst the Nutraone Burn One had some good ingredients, you won’t be seeing me singing its praises anytime soon. Nah, that’s reserved only for the most powerful of the bunch. If you’re curious as to what those are, check out our Top 5 Fat Burners List!

The Nutraone Burn One Review had a couple of good ingredients, but all of them had been stuffed inside of a small prop. blend that couldn't have possibly accommodated them all.