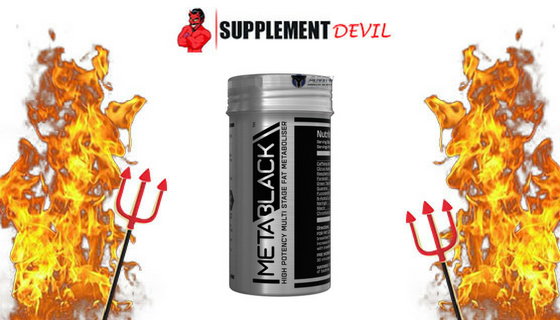 Today, in our Meta Black M3 Review, we’re going to be looking into one of the more underappreciated fat burners out there. By that I mean, it really doesn’t get that much hype. It’s still pretty new, so who knows where it will go in the future, but as of now…?

The Meta Black M3, specifically, comes from a line of products that they include in their “stay lean program.” Which is a package deal of sorts, one that you can mix and match based on your own budget and needs — although doing that is likely to cost you more than just buying the whole thing.

Either way, not much can be gleaned about this particular supplement company. We did check out their website, but it looks pretty bare. So, branding-wise? Not so good. How about the rest? Will the Meta Black M3 be able to meet the devil’s expectations? Continue reading to find out more!

How does the Meta Black M3 work?

Alright, so our first subject of study is the how aspect. How does it work, and will it work for you? For us to be able to answer that, we’re going to have to look at its specifications.

It’s a fat burner, one that promises the usual things. Things like thermogenic benefits, energy-boosting benefits, appetite suppression benefits (which practically all supplements fail to prove), etc. They kept their ingredients list pretty minimal too.

From just my first look, I see a couple of good names being thrown into the loop. However, there’s a glaringly concerning ingredient up at the top of the list, as well. So, I’d say I’m about half-and-half at the moment.

For now, I’ll give you my pre-emptive opinion… It’s not looking so hot out here folks’, and the devil does like his fat burners extra steamy. Which, doesn’t really bode well for our Meta Black M3 Review, but we’ll see. Perhaps it’ll be able to turn it around in the next round. 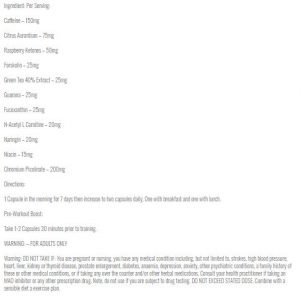 We start our ingredient list with a stimulant. That’s not really a bad thing, a lot of supplements promise stimulants in their formulas as an extra energy boost. The fact that the Meta Black M3 ended up choosing caffeine is not all that surprising either.

At this time, caffeine is one of the best choices when it comes to energy-boosting. It should be noted, that there is enough caffeine here to start a beginner off right (at 150mg), but that this wouldn’t be very effective for people who consume caffeine regularly.

Okay, so this is when things get kinda sticky. Citrus Aurantium, may also be referred to as Bitter Orange Extract or Synephrine, is an ingredient that has been proven to have fat burning benefits.

However, it’s not really something that we’d recommend for a fat burner. Especially one that has a sizable amount of caffeine (like the Meta Black M3.) We’ll talk more about why in the side-effects section.

Honestly, it would have been much more preferable, if they had stuck to putting more Green Tea in their formula. They could have easily done away with the bitter orange extract, for one. Because, as much as Green Tea has been proven to help you burn fat by boosting your metabolism…

It will not work at the amount that the dosage Meta Black M3 has it in. There recommended amount is 400-500mg, and this formula only has 25 mg. That’s not enough.

Again, we have on our hands a pretty good fat burning ingredient. It’s been proven to work for people who might be L-Carnitine deficient. However, once more, the Meta Black M3 completely misses the recommended dose.

On the other hand, we have too much of this. Chromium has been proven to normalize the blood glucose levels of diabetics, but it has no effect on people that are healthy.

This is another one of those ingredients they could have just excluded. There was a lot of hype for it around the early 2000s, but it ended up falling flat. As in, there has been no positive research done to prove its effectiveness.

As for the price, the Meta Black M3 sells for a fairly moderate price of 23.99 Euros. That wouldn’t be that bad… if they had proper dosages. However, considering the fact that all the good ingredients were underdosed? Yeah well, the price ends up looking like crap.

Side Effects of Meta Black M3

Most of the ingredients, as mentioned, are underdosed. However, you might still expect some drawbacks from the Bitter Orange Extract.

I was fairly skeptical about the supplement throughout this review, but that’s for a good reason.

There’s no point in dealing out wimpy-ass reviews. We say what we say here at Supplement Devil, and the Meta Black M3 definitely deserved what it got.

The company did its research. We saw some actual fat burning ingredients here and there. However, there was not enough of any of them. Plus, the use of pointless ingredients like Raspberry Ketones, or side-effect ridden ingredients like Bitter Orange Extract was a complete turn-off.

You’re better off looking elsewhere! Check out our Top 5 Fat Burner Review to be introduced to some monstrous fat burners!

The Meta Black M3 showed some promise, however, all of the ingredients that it used were too underdosed for any of it to be effective!