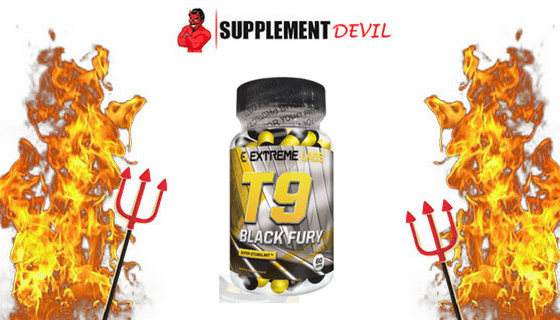 They described their formula as powerful and creative. So, I’m expecting a bit of a twist for this one. Nothing too crazy, but if they’re confident enough to go around saying things like that… Well, then they better have the formula to back it up!

The manufacturer that produces this product is called Extreme Labs. We’ve seen them around before, they make a variety of other supplements. Some of which are not doing as well as the others. So far, it seems to be a pretty lowkey brand.

Will this fat burner be their bread and butter? Continue reading our Extreme Labs T9 Black Fury Review to find out!

How does the Extreme Labs T9 Black Fury work?

The first thing that we look at when we’re judging fat burners, are its claims. What will it do for you, and how does it claim to do it? For the Extreme Labs T9 Black Fury, we get the promise of a strong stimulant-driven formula that’s meant to accelerate the fat burning process.

As a general rule of thumb, I get wary when a supplement talks about stimulants as their key defining feature. After all, with those kinds of supplements almost all the fat burn comes from the jitters and the hyper-ness that comes with jacking yourself up with ingredients like caffeine.

Extreme Labs pretty much scoffs at this idea. So, I’m expecting something a bit different for this one. The only thing is, there’s a big hurdle that’s keeping us from giving this fat burner an honest shake. All of the ingredients inside of their formula are inside of proprietary blends.

That’s a term used in the supplement world to describe a blend of ingredients that count as one item. In that way, companies are able to cheat their way out of exposing the true dosages of their ingredients. Which might not seem all that bad.

However, when you consider the possibility of some ingredients being too little (making them ineffective) or too much (making them potentially risky), then you’ll see the reason for the wariness. Either way! We’re going to be breaking down said ingredients now. 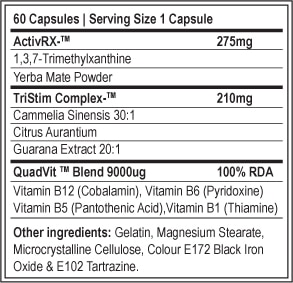 As mentioned previously, rather than list out the ingredients individually, all of them are grouped into proprietary blends! That’s what we’re going to be breaking down today. The first of which being, the Active RX.

This blend includes two ingredients, one of which is called Yerba Mate Powder. Out of the two ingredients, this has to be the more promising one. It’s a type of tea extract that is used in certain places around the world.

Our next blend has three ingredients, and overall dosage count of 210 mg. In this blend, we see a pairing that I really dislike seeing inside of fat burners. That is, the Citrus Aurantium and Caffeine pairing.

Citrus Aurantium is a fat burning product that has been proven to prove benefits (minimal.) However, it’s also a banned substance in some countries because of its tendency to cause nasty side-effects (listed down below.)

Perhaps as a consequence of, the admittedly, low dosages — we get the T9 Black Fury at a fairly cheap price. It goes for 19.99 Euros, which is a little below than the average. However, as mentioned, this is a consequence of the low dosages and -frankly- the lack of actual fat burning ingredients.

As far as side-effects go, there are a couple that you should watch out for!

Alright! That does it for our Extreme Labs T9 Black Fury Review! As far as an opinion goes, I can confidently say… that this is horrible. All there is in here, is caffeine. Caffeine, caffeine and more caffeine. All of the dosages for the other ingredients are low enough that they don’t work!

As such, the only thing you’re getting is an energy-boost. It’s a shame really, Extreme Labs seemed so confident about being the best stimulant based fat burner. BUT nope, they ended up being one of the worst.

Now, if you’re looking for a fat burner that will burn actual fat, then check out our Top 5 Fat Burners list instead!

The Extreme Labs T9 Black Fury is a horrible fat burning supplement. The most you'll get from here is an energy boost and potential side-effects!