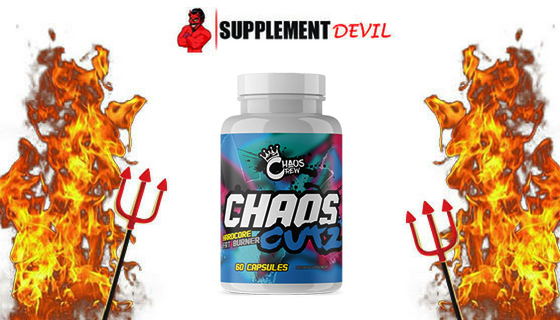 Sometimes, an introduction to something new is all that you need to kick-off from whatever fitness stump you might have found yourself in. Today, we’re going to be looking at one of the newest fat burner supplements in the market in our Chaos Crew Chaos Cutz Review!

The product, no surprise, is manufactured by Chaos Crew. Much like the product itself, it’s fairly new. Barely a couple of months old (at the writing of this article.) Despite that, they found the time to make and re-make two popular products. One being the Chaos Cutz, and the other being a pre workout supplement called ‘Bring the Chaos.’

Fledgling or not, we’re going to check out this fat burner and see what’s hiding underneath those depths. After all, despite the company’s bold move of renewing their product, the fact remained… the first version had not been good enough.

Will the changes that they made be enough to meet the Devil’s expectations? Well, we’re going to learn more about that together as we go further down the rabbit hole with this review! So, continue reading to learn more!

How does the Chaos Crew Chaos Cutz work?

Now, let’s talk a little bit more specifically about the product itself. How does this fat burner differ from the others, and what can we expect from it?

Well, straight up, from our first look — we can see that they picked a couple of interesting ingredients. Some of these, I’ve never heard of before. That’s saying something, considering the number of fat burners I’ve seen over the years.

However, I’m willing to learn new things, and perhaps the Chaos Crew Chaos Cutz will be the one that teaches me today! We shall see. The main ingredients for the supplement is Chromium and Caffeine, we’ll go over my opinion on those later on, but just know that it’s very mixed.

As far as what it claims to do. It doesn’t step too far from the usual fat burner. You know, they promise the usual boost in your metabolism, thermogenic benefits, energy-boosts, etc. They keep their labels open and honest (a good choice on their part), so our ingredient breakdown will be very detailed.

No time for babbling now, let’s move on to the next subject.

As mentioned, one of the main ingredients from the Chaos Cutz, is Chromium. This is a powerful fat burner when used properly. Unfortunately, despite their honest label, the company is unlikely to admit the limitations of this particular ingredient.

Specifically, the effectiveness of chromium has been limited to people who are diabetic. Diabetics should experience a normalizer effect on their blood glucose levels. However, healthy individuals will be hard-pressed to get the same promised results.

One of the reasons that this product is lauded as packed with stimulants, is because of the amount of caffeine inside of the formula. Now, don’t get me wrong! Caffeine is very good at what it does — boosting your energy. That’s why we see it in a lot of popular brands (like the number 1 fat burner — the Instant Knockout.)

However, too much caffeine, when taken by an inexperienced consumer, can lead to many uncomfortable side-effects (will be discussed further later.)

As far as thermogenic ingredients go, cayenne pepper is definitely one of the best. It’s been proven to effectively help you burn excess calories by increasing your body temperature — prompting a steady calorie burn.

This is not something I see all that often, and for good reason. It’s not really a fat burning ingredient. At most, some might call it a nootropic (something that eases the mind and boosts cognitive abilities.)

There’s not much that is known about this particular ingredient. It’s been suspected of improving the rate in which you build up muscle mass. However, this cannot be proven. What’s more, this is connected to a banned substance that has been known a couple of nasty side-effects.

The Chaos Cutz sells for around 29.99 Euros in most UK online retail stores. That’s about 35 US Dollars. Admittedly, that’s not such a bad price. It’s just a little bit more expensive than the cheaper supplements, but manages to stay average as far as fat burners go.

There are a couple of ingredients inside of the Chaos Crew Chaos Cutz that might cause a couple of side-effects. These include:

This wraps up our Chaos Crew Chaos Cutz Review! Now, to be perfectly transparent, the Chaos Cutz did pretty well. This is in all fairness.

They did some research it seems, but they might have gotten a bit too trigger-happy with their OG and remake version. See, there’s no doubt that there are some good ingredients in here. The caffeine and the cayenne pepper, specifically, are very smart choices.

However, we also see chromium and DMHA, both of which could have been switched off with more effective alternatives like Green Tea extract or Green Coffee Bean Extract.

Ultimately, it should be able to provide mild benefits. That, is assured. However, if you’re looking for something powerful and demonic in its ability to cut fat. Then I recommend checking out our Top 5 Fat Burners list instead!

The Chaos Crew Chaos Cutz is not a bad supplement. It features good ingredients like caffeine and cayenne pepper. However, there are definitely areas that could be improved to make perfect.