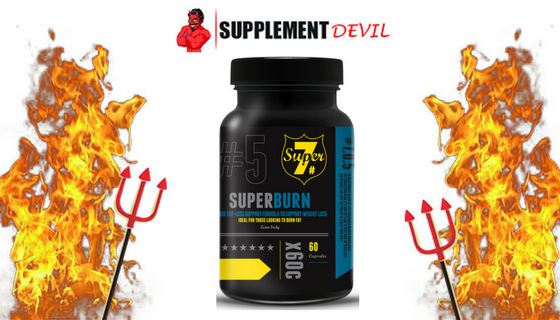 Supplements from all over the world continue to pop up from the woodworks, and in today’s Bio Synergy Super Burn Review, we will be looking at a fat burner supplement manufactured by a company called Bio Synergy.

The company comes from the UK, and despite there not being much on this supplement specifically. Bio Synergy is actually a pretty well-known brand. Having been connected to various athletic equipments over the years.

Let’s get to it then, and find out if this supposed ‘Super’ Burn is as hot as it promises to be or just another pseudo-hellfire supplement.

The company claims that it uses only 7 different ingredients to help you burn fat. Now, that isn’t technically a bad thing. Sometimes the less ingredients there are- the better. That means, that the formula will be more focused on emphasizing the benefits given by the ingredients that actually work.

A lot of the ingredients in the Bio Synergy Super Burn are fairly common, seen in many other Fat Burner supplements, so there’s really nothing new here. Just the same old shit, over and over.

Note, that you are recommended to take only two capsules per day. Which is not optimum, 3-4 doses would have been a lot better at ensuring that you have access to 24/7 fat burn.

For us to be able to tell whether or not the Bio Synergy Super Burn will actually be able to help you burn fat and lose weight- we will have to dig in a little deeper. Time to reach into this fiery pit and see what we find. 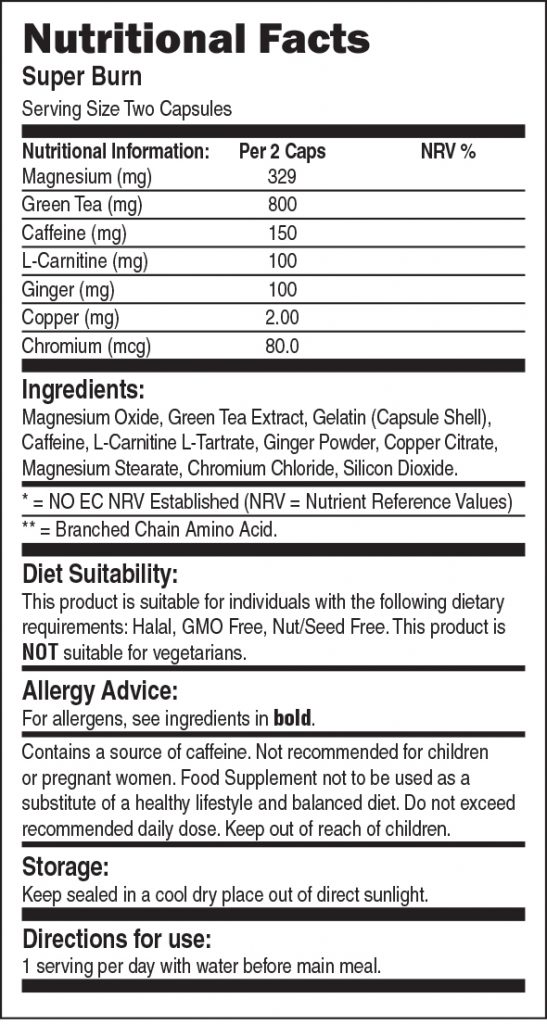 This is an ingredient that is popularly used in a lot of fat burning supplements. It’s made out of substances that are known to help increase the rate of your metabolism, helping you burn actual fat. The higher the dose is, the better. Which makes the 800 milligrams inside of the Bio Synergy Super Burn optimum.

Definitely a good decision in their part, because unlike most other ingredients, Green Tea has actually been proven to work.

The next highest-dosed ingredient is Caffeine- which they have around 150 milligrams of per serving. Much like Green Tea, Caffeine has proven to be quite effective when it comes to fat burner supplements.

The only thing is, Caffeine also has a tendency to have you twitching like mad- and can result to some pretty serious energy crashes. Taking too much of it at once is not a good idea, and whilst there is only 150 milligrams of pure Caffeine in the Bio Synergy Super Burn- Green Tea has been known to have caffeine content as well.

Because of this, people who are unused to consuming Caffeine on a regular basis are liable to experience fairly intense side-effects.

Magnesium is an all-natural ingredient that is more commonly found in Testosterone booster supplements. Which begs the question, why is it being used here? Well, outside of its libido-boosting effects, it’s also known to increase the amount of testosterone in your body- by preventing it from chemically changing into something else.

There are 319 milligrams of it per serving, which is a little less than what would have been recommended for men, but right on the nose when it comes to women. As such, this ingredient, may or may not be effective for you.

The streak of good ingredients stop here, because- although L-Carnitine is seen in a lot of Fat Burner Supplements- there aren’t any studies that are able to prove that it actually works. The ingredient has been thought to work in theory– promoting fat burn by stimulating the energy cells inside of your body.

Again, sounds good theory, but a load of shit outside of it all. It’s a shame that so many supplement companies insist on including it as a ‘key’ ingredient, despite lack of evidence when it comes to its actual effectiveness.

The price for this little sucker is actually not that bad. You can find it everywhere online- going for around 20.00 Euros per container, which carries a month’s worth of pills. Definitely not as badly priced as other supplements.

Bio Synergy comes with some pretty bad potential side-effects. However, if taken responsibly- one shouldn’t have too much of a problem.

Not going to lie, the Bio Synergy Super Burn is not as bad as some of the other supplements we see clogging up the market. However, it’s also not the best one out there- evident by the misuse of several ingredients.

There are definitely things that could have been done a little better. Really, a lot of these shitty-ass companies should just learn to look into what actually works- rather than just blindly choosing do what everyone else is using for their own supplements.

You would think that reading up on the subject is so hard, considering the number of companies who keep getting it wrong- over and over again. Unfortunately, Bio Synergy is one of these companies. Trapped in a hell of their own making, promising miracles like a messiah- only to end up being a wolf in sheep’s clothing.

It’s not bad for its price, an effective energy-booster if nothing else, but it’s definitely best to look elsewhere if you want long-lasting results.

The Bio Synergy Super Burn is a fat burner supplement that is mildly effective at best. It does offer some fat burning benefits, as well as a fair bit of energy boost, however, certain things could have been done to make it even better.