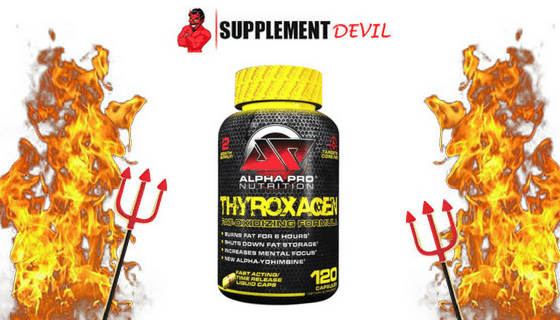 Ready for something that can help you burn fat for the Summer? Well, then you might be interested in reading up our Alpha Pro Nutrition Thyroxagen Review! Today, we’re going to be breaking down this fat burner and cluing you in on some of the more finer details.

Does it actually work? How does it work? Etc. To answer that, first up, let’s have a brief look at the background. The people who make the Thyroxagen are called Alpha Pro Nutrition. They made it specifically to heat up the body and burn fat.

It should be said, that they’re not a new or inexperienced company. No, they’ve been around for a while. However, none of their supplements have yet caught the Devil’s eyes. Will this be their winning glory? We’ll see!

As mentioned, our Alpha Pro Nutrition Thyroxagen Review will be covering all the punitive details about this supplement, and by the end of it we would have gotten back to you with a clear opinion on whether it’s something you would want to take.

And so, give it a scroll! See if it’s something you’re interested in.

How does the Alpha Pro Nutrition Thyroxagen work?

The first thing that we’re going to be covering, is the how. How does the Alpha Pro Nutrition Thyroxagen work? Well, from my personal first look, I can see a couple of interesting things in here that immediately catch my attention.

First, are the ingredient groupings. Formally, these groupings are called proprietary blends, and although they might sound all professional and bright… it’s pretty much just a wolf in sheep’s clothing.

Proprietary blends, I can safely say, are the bane of my (and the rest of the fitness industries) existence. It’s a tactic employed by supplement companies that don’t want to share their formula, and no it isn’t because they don’t want people to steal it.

It’s usually because they don’t want us to know what’s inside of it. Either because they overdosed their ingredients or under-dosed it. Both of which are equally bad things. All in all, it’s not a good start and is something I’m going to keep my eye on as I proceed to the ingredient breakdown part of this Alpha Pro Nutrition Thyroxagen Review. 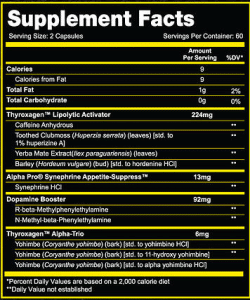 The first ingredient that we’re going to be covering is caffeine. This is fairly commonly used inside of fat burners, so it doesn’t surprise me to see it here. It’s also popular for a good reason (unlike 90% of other unnecessarily popular ingredients.)

After all, Caffeine has been proven to boost one’s metabolism (minimally and only for over a short period of time) and energy (if used properly.) Of course, the fact that it’s in a blend will keep us from knowing for sure whether it’s being used properly here (check out side-effect section for potential side-effects.)

This one, is a lot more problematic than the previous ingredient. After all, despite the known fat burning benefits (minimal), this ingredient has been linked to a dangerous substance that has been banned for use in several countries.

You can check out potential side-effects in our side-effect section, but just know that synephrine has a tendency of reacting even more negatively when paired with things like caffeine.

If it’s not a fat burner, then why have it in here? More than that, this ingredient has also been linked to several nasty side-effects (see side-effect section.)

Admittedly, the price for a container of a Thyroxagen fat burner supplement is fairly cheap. At this time, it’s going for around 28.33 US Dollars in online retail stores.

That sits just below the average for fat burner supplements that have the regular 30-day servings. Which, in turn, makes it even cheaper (as the Thyroxagen offers 60 days’ worth of capsules.)

Although a lot of the ingredients in this formula are safe (for the most part), there are a couple of them here and there that we cannot confirm (due to the lack of details on ingredients inside of prop. blends.) These include:

Our hellish Alpha Pro Nutrition Thyroxagen review now reaches its close. So, ultimately, what do I have to say about this fat burning supplement?

Well, the cheap price is no doubt tempting. However, there’s a lot that can be said about their choices in ingredients. They really could have done a better job at picking and choosing the ingredients to keep and tossing out the unproven or side-effect ridden ingredients.

The fact that they stuffed their ingredients inside of blends only made the process leerier. I would appreciate knowing how much of each ingredient I’m taking, but they don’t even give me that.

So, all in all? I’m pretty bummed. Looks like you’re going to have to keep looking as well. My advice? If you want a fat burner that will help you get shredded fast, check out our Top 5 Fat Burners list!

There are a couple of good ingredients inside of the Alpha Pro Nutrition Thyroxagen. However, their dosages are kept secret -- which keeps us from knowing their true effectiveness.