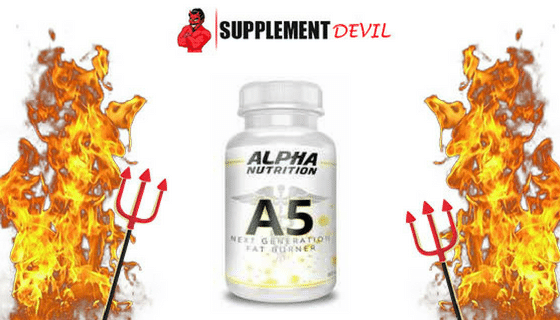 Our Alpha Nutrition A5 Review will be introducing a fat burner that’s been around in the market for quite some time now. Is it an oldie but a goodie? Or something that should be left behind in the past?

In order to answer that, we’re going to have to take a closer look at its ingredients. Will the formula be enough for it to wow us in the face of its newer competition? Well, we’ll have to see. BUT first, let’s talk about their current branding.

As far as packaging goes, A5 – the supplement company in charge, keeps everything pretty basic. You know, it’s not anything wow-worthy. I guess, you can say that it’s fairly basic in design, which is how most supplements were decorated back in the day. Simple and straightforward.

What isn’t normal, is the kind of backing that they have. This fat burner sponsors Aarron Lambo, a popular British Bodybuilder, that stands by his use of this formula. So, we have something a little extra to look forward to. Let’s see what kind of formula this famous bodybuilder uses in our Alpha Nutrition A5 Review!

How does the Alpha Nutrition A5 work?

The first thing we’ll cover, is how effective this formula actually is. Will it work as an actual fat burner? OR is it playing with the rules a bit by bending it around? Most fat burners have a tendency of going one way or another.

The Alpha Nutrition A5 doesn’t exactly step out of that predetermined box. In fact, they stay right in the middle of it with their five ingredients. I’ll tell you a little bit more about ‘not stepping out’ later on.

For now, all you need to know is that it ain’t looking so hot. For one, there was barely any information that could be found about this formula. Whether it be online or in stores. Most of them have the bottle up for display but the information on the ingredients was amazingly sparse.

Even so, we’re going to be breaking down all the known five ingredients and telling you whether or not purchasing this will actually be worth your time! So, continue reading to learn more!

The first ingredient that is known, is caffeine. Alpha Nutrition A5 has about 175 mg of pure caffeine in their formula, which is not all that unusual.

These days, most fat burners include caffeine in their formula to add a quick energy boost. It also serves as a fat burner ingredient, although its effects as a fat burner are short-lived (lasting only a couple of months) and are only effective for people who are already fairly lean.

This is when we talk about the ‘not stepping out of the box’-thing. As far as fat burners go, Alpha Nutrition A5 stays basic. It uses a lot of the same ingredients found in most fat burners. We had caffeine just now, and now we have Green Coffee Bean, which is popular for its fat preventing benefits.

Much like Caffeine and Green Coffee Bean, Bitter Orange is a standard. A poor one at that. It’s not really something that I like to see inside of supplements. It has a tendency of promoting bad side-effects and reacts even more negatively when paired with caffeine (see side-effect section down below.)

This is honestly one of the lesser known ingredients. Which, I supposed, could be considered ‘stepping out of the box.’ However, it’s really not all that deep. We don’t know anything about it at this point in time. It’s just another unproven ingredient that no one really knows about.

Here we have our third caffeine filled ingredient. There are only 25 milligrams of Guarana here, but guarana has also been said to have more caffeine than most coffee beans. As such, you can expect to experience a couple of caffeine-induced side-effects.

As far as pricing goes, the Alpha Nutrition A5 comes out average at around 29.99 British Pounds. That’s not all that expensive, but when you consider the range of ingredients… well.

Side Effects of Alpha Nutrition A5

There are a couple of ingredients inside of the Alpha Nutrition A5 that can cause side-effects. These are:

This ends our hellish Alpha Nutrition A5 Review! Although in the end, it really wasn’t all that hot.

We kind of missed the fire and brimstone on this one, but at the same time it’s not all that unexpected. Of course, got to give it up to Alpha Nutrition, they didn’t do all that bad. At least they used stuff like caffeine and green coffee bean (ingredients that can also be found inside of the most popular fat burner in the market — Instant Knockout.)

However, they could have done a lot more with their allotted 5 ingredients. Instead, they kind of just packed it all up with more stimulants as well as ingredients that don’t really work. It sells for cheaper than most supplements, but whether it’s worth even that cheap price comes into question.

All in all, this isn’t the one for us. But if you’re interested in learning more about the best fat burners, check out our Top 5 Fat Burners list!

The Alpha Nutrition A5 is and OK supplement. It has 2 ingredients that can be considered good, but it also comes with known side-effects and unproven ingredients.