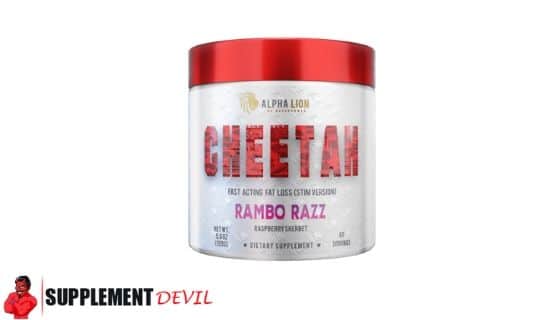 From caffeine to Isopropylnorsynephrine, this fat burner boasts quite a few stimulants. And it’s potent, too.

The effects it claims to promote include:

With such a strong formula, a question inevitably comes up: is it safe and free of side effects? To find that out, we’ll have to take a closer look at the ingredients in this Alpha Lion Cheetah review.

Alpha Lion is a relatively new supplement company. They’ve been around since 2017 and have grown a lot over the past years. Their products are highly rated for their stylish and attractive design, and most users are happy with the results.

You can also check our other reviews of Alpha Lion’s products, including Alpha Shredder and Super Human.

Next up, let’s check the benefits of Alpha Lion Cheetah.

Now, if this product can actually deliver these benefits, it will be one hell of a fat burner. So let’s check the ingredients to see if that’s the case.

Just like with many other Alpha Lion’s products, Cheetah is a quite strong fat burner. It uses a mixture of stimulants that will help you burn fat and have more energy. It’s not for everyone though; this many stimulants could easily cause side effects in intolerant people.

Acetyl-L-Carnitine can boost your workout performance and help your cognition. Experts aren’t sure how effective it is for fat loss though. For some people it might work, especially when you’re deficient in it. (1)

This is a classic ingredient in pre-workouts and fat burners. Caffeine gives you energy, boosts your focus, and helps you finish your workouts. It also stimulates your metabolism and suppresses appetite, making in an all-around great ingredient for fat loss and training performance. (2)

L-Carnitine has similar effects to ALCAR in that it boosts your exercise output. However, it doesn’t cross the blood-brain barrier as effectively, which means it won’t give you many cognitive benefits. (1)

Theanine is a natural compound found in some mushrooms and green tea. Upon ingestion, it puts you in a calm and relaxed headspace. While at the same time promoting deep focus and creativity. It can help with your workouts and make you more focused on doing your reps. This can indirectly help you boost your metabolism and fat loss. It doesn’t have any direct fat loss properties though. (3)

This ingredient is similar in effects to synephrine, a compound found in bitter orange peel. However, it has fewer reported side effects and might be even stronger at enhancing lipolysis – the process where your body uses fat for fuel. (4)

This is just a different form of caffeine. It has pretty much the same effects as regular caffeine – giving you more energy, focus, and higher metabolism. Be careful if you’re sensitive to caffeine, as it can cause jitters and anxiety in higher doses.

Cayenne pepper is great to see included here. It’s one of the better ingredients for fat loss purposes. What it does is it increases your metabolic rate, thus making you burn more calories. (5)

Grapefruit Seeds contain compounds that can help you with certain things. Primarily, it has antioxidants that fight oxidative stress. This ingredient is also shown to reduce estrogen via aromatase inhibition. This is great for men looking to keep their testosterone levels high. (6)

GBB is a pro-carnitine molecule. Supplementing it can raise your carnitine blood levels. This can be helpful if you’re deficient in carnitine; in which case you’d notice some fat loss results from it. But since our bodies naturally produce carnitine, plus we get this amino acid from food. It’s kind of hard to be deficient in it. (7)

It’s speculated that Grains of Paradise works as a stimulant. In other words, it might help you be more concentrated and energetic. At the same time it might help you burn a few extra calories. However, we’ll need more evidence to confirm these notions. (8)

Huperzine A is a popular ingredient in nootropics. It can boost your cognition and help with certain things brain-wise. We can see why it was included in this fat burner though. Since it helps with cognition, it can also improve your workouts, which has a knock-on effect on your fat loss. (9)

Bioperine is a premium and patented form of piperine, aka black pepper. It helps your body get the most out of other ingredients in this product. (10)

While Alpha Lion Cheetah has some great ingredients, it could be even better if it had:

As you can see, there’s not much missing from Alpha Lion Cheetah. We feel it’s a great formula overall. But these two ingredients would make it even more effective!

How to Take (Dosage)

It’s suggested to take 2 scoops of Alpha Lion Cheetah with a full glass of water on an empty stomach. You can take one more serving at lunchtime.

Just make sure not to take more than 6 scoops within 24 hours. 6 scoops is already a hell of a lot of caffeine, taking any more than that can potentially lead to adverse side effects.

As a matter of fact, we’d strongly suggest starting with just 1 scoop to check your tolerance. The label on Alpha Lion Cheetah states the same.

None that aren’t already known. The only possible side effects of a product like Alpha Lion Cheetah are those linked to caffeine. However, these side effects typically only occur in very sensitive users. Or if you overdo it with servings. As long as you know how you react to caffeine and follow the dosage instructions, you should be fine with this supplement!

One bottle of Alpha Lion Cheetah costs $49. It’s a fair price considering that the product will last you 2 whole months if you take one serving per day.

Alpha Lion Cheetah is available to buy on the official website.

It’s a solid value for money in our opinion. Alpha Lion Cheetah works, and for that, it’s worth the investment. You’ll feel the effects once you start taking it, the only issue could be the sensitivity to stimulants. If you do react negatively to caffeine, then you might want to look for a stim-free fat burner.

So that’s it! In case you skipped straight to here, here’s a quick recap of this Alpha Lion Cheetah review:

The verdict of our Alpha Lion Cheetah review:

Overall, it’s a good product with some slight downsides, such as its aggressiveness. However, this can also be a massive benefit, depending on how strong you want it to be!