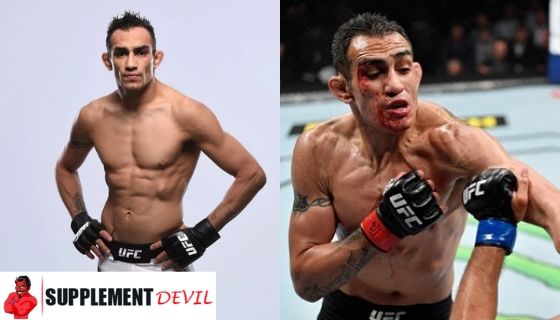 Tony Ferguson is a pro MMA athlete who competes in the UFC lightweight category. Many people consider Tony to be one of the best lightweight MMA fighters ever, but he wasn’t always planning to become one.

Fresh out of the university, Tony moved to California where he started working as a bartender. During one of his night shifts, he fell into a conversation with the bouncer about his sporting background. The bouncer invited Tony to help some young MMA fighters work on their wrestling skills. It wasn’t long before Tony fell in love with MMA, which led him on the path towards starting his pro career.

“Life’s a rat race… And I ain’t no rat. I’m a turtle, a ninja turtle. Michelangelo is my favorite, what’s yours?”

As any professional athlete, Tony eats a very clean diet. He tries to cook his own food when he gets the chance. He also includes plenty of fruits and vegetables with every dish. Other foods he eats include:

This goes without saying but Tony’s diet is a lot stricter when preparing for a fight. We’ll go more into detail on this below.

In terms of his general diet though, it is more relaxed and allows for bigger portions. For example, Tony might cook meat in healthy fats instead of boiling it. This provides him with extra calories to grow his muscles and have the energy for training.

Regardless of what his diet is like, Tony always keeps hydrated by drinking plenty of fluids each day. Mostly pure water, but sometimes he’ll add electrolytes like magnesium, sodium, and potassium which he loses through sweat.

He might also drink some green tea if he wants to speed up his thermogenesis and metabolism. Tony avoids sugary drinks including soda, as these can wreak havoc on his health and performance.

When preparing for a fight, that’s when things get really strict for Tony. He usually has a coach to make sure he sticks to the plan and gets the best results possible.

He’ll increase his vegetable and fruit intake during this phase to get plenty of fiber. This helps him stay fuller for longer along with replenishing those vital nutrients.

In terms of fruit, however, Tony won’t just eat anything. High-glycemic fruits are off-limits when he prepares for a fight. The reason being, high GI fruits spike his blood sugar which leads to energy crashes and mood swings. The last thing Tony wants at this stage.

For energy, he eats plenty of good carbs. These include brown rice, sweet potatoes, and oats. Unlike sugars, complex carbs slowly release in Tony’s body, giving him a more sustained type of energy – ideal for long workouts.

Little is known on Tony’s exact supplement regimen. However, pro athletes like Tony generally stick to the basics with omega-3 fish oils, multivitamins, and minerals. He might also drink a protein shake consistently over a period of time to support his muscle growth when needed.

Omega-3 fish oils are one of the most fundamental supplements for athletes like Tony, and the reason is simple. These essential fatty acids support brain function, helping athletes be sharper and smarter. Plus, omega-3s also reduce inflammation which is quite important for muscle recovery.

When you’re training hard, you’ll want to keep the inflammation down as this will allow you to get more out of your workouts – champions like Tony Ferguson know this very well.

For Fighter Supplements to train like Tony Ferguson you can check out Fighters Core.