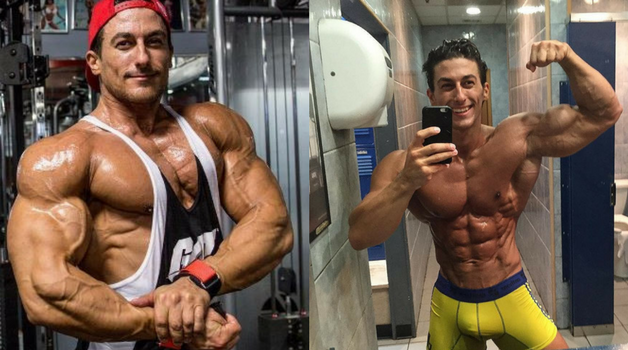 Sadik Hadzovic is someone who grew and matured in a place that people don’t always come back from. He had faced many difficulties as a child, and his one respite from all the chaos had been the cartoon characters inside of his favorite comics.

Superheroes. Ripped and lean. Strong enough to save the day, that’s what Sadik aspired to be. He grew into his present body slowly, nurturing and caring for it carefully.

Nowadays one can see him making history by winning bodybuilding competitions from all over. He’s an inspiration, much like the heroes he himself had idolized as a child.

Sadik Hadzovic competes professionally and works as a fitness model all year round. Unlike some of his fellow bodybuilders, he’s on a strict diet regime every day of the year.

Well, we say strict but there is some wiggle room in this hellish diet of his. To begin with, Sadik follows a strict Paleo diet. This means, that the kinds of foods that he can eat are limited. He also prefers to stay away from dairy products, which adds another limitation to his already strict diet.

To add even more injury to this ever growing hellscape, Sadik is an ectomorph. Ectomorphs tend to burn calories like crazy, keeping them lean but burning fat so quickly that it becomes difficult to maintain a well-formed physique.

Sadik Hadzovic restricts himself to around 2,500 to 2,750 calories per day, and allows himself at least 2 cheat meals. Cheat meals are a good way of keeping his body loaded in carbs. Carbs that he usually keeps low when on a diet.

Because of his ectomorph condition, Sadik finds himself having to constantly up his weights and reps. This is his way of ensuring that he keeps his body as fit as possible.He also trains every day of the year, keeping himself as healthy and fit as he possibly can.

Despite his busy schedule, Sadik does update his social media a lot. You should be able to follow his fitness journey through Instagram. However, if you want something a little more formal, you can also check out his official website, he offers different services there that you might be interested in.

Sadik Hadzovic takes supplements as a part of his regular routine. Because of his ectomorph condition and his strict (limited) diet, there’s a lot he has to make up for nutrition-wise. As such it only makes sense that he get these nutrients and vitamins from other sources.

Here is his complete supplement stack:

-See Supplements that Get You Jacked-

Flash back to the morning of the Olympia. @simsolutions and @nashadzovic both said WTF 😳