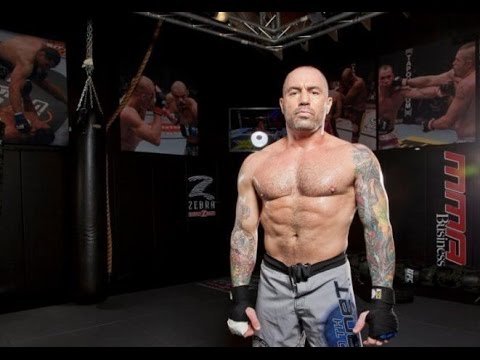 Born and raised Newark, New Jersey, Joe Rogan is an American stand-up comedian who is widely known for his work as a mixed martial arts (MMA) color commentator, businessman, in addition to his stints as a television host on hit TV shows such as Fear Factor.

Throughout his childhood, Rogan’s interest in martial arts developed shortly after he entered the world of sport by participating in Little League Baseball. Ever since then, he’s gone on to earn a black belt in Brazilian Jiu-Jitsu, became a champion kickboxer, and has also been actively involved with UFC since 1997.

Back in 2009, Rogan even launched a free audio and video podcast entitled The Joe Rogan Experience, which has gone from strength to strength since its inception. This effectively built upon his success on the comedy stage as well as proving to be a marker of his growth from a backstage interviewer to arguably the most well-known color commentator around.

Nowadays, it’s safe to say that Joe Rogan pays close attention to his diet and training so that he’s able to maintain his fitness levels for participating in martial arts as well as in his regular gym workouts. If you’d like to find out more about exactly what he does to keep himself in shape including the kind of diet he follows and his preferred methods of training, simply continue reading.

In a previous installment of The Joe Rogan Experience, Rogan expressed that he is very regimented when it comes to his workouts so that he can remain in the best shape possible throughout the year. Each Sunday, he will schedule each of his workouts for the following week so that he remains motivated to reach his fitness goals. As Rogan himself says:

“The only exceptions are injuries and sickness. That’s the schedule.

“On top of that, there are other things that I enjoy doing like kickboxing and Jiu-Jitsu. I work those in when I can.

Thanks to putting a great amount of effort into his training over the years, Rogan has clearly managed to put on a huge amount of muscle mass whilst staying quite lean. A combination of weightlifting and regular martial arts training has allowed him to achieve exactly that.

But, just what kind of training does Rogan prefer week in week out? You ask. Well, his preferred option in terms of weightlifting is kettlebells as this allows him to get in a quick and effective workout while targeting multiple muscle groups at the same time.

In terms of the time he spends lifting in the gym, Rogan prefers not to go to failure as he believes this can have a negative impact on the rest of his workouts for the rest of the week. Instead, he follows the Pavel Tsatsouline protocol which involves restricting repetitions even when he feels like he can do more. In turn, this means he can give his all for more sessions per week.

Regardless of the time of year, Rogan will always try his best to stick to a healthy, well-balanced diet so that he can not only fuel his intense workouts, but also remain in the best shape possible. In order to achieve this, he will follow a strict meal plan which involves little to no carbohydrates, no bread, and no sugar.

In order to place focus on getting in the correct micronutrients, Rogan will also consume a high amount of vegetables which also ensures that he feels fuller during the day and is less likely to fall off track with his diet regime. With regard to protein sources, he will typically consume lots of meat – mostly wild game.

Regarding his diet choices as a whole, Joe was quoted to have said the following:

“I do everything that I can to put my body and my brain in a good place so I’m keeping my engine smooth. I’m changing my oil, I’m changing my spark plugs and I’m making sure that it’s operating. It’s not going to be perfect but I know that I’ve done my best to keep it operating to the best it can.”

On his podcast, Rogan has even stated that he sometimes will skip breakfast if he doesn’t feel hungry – despite it often being marketed as ‘the most important meal of the day’. Here’s what he had to say:

Overall, it’s clear that Joe Rogan pays close attention to what he puts in his body, and will try his utmost to avoid eating foods which can be classified as ‘junk’. This approach to dieting seems to have paid off for him over the years, and experimentation has allowed him to find something that works effectively for him.

As you’ll now be aware, Rogan places a heavy focus on the food he puts into his body as he believes that it can be used as a method of building a healthy body – working more effectively when combined with regular training.

However, he will also use supplementation as a way of getting in his micronutrients which goes hand in hand with his regular consumption of vegetables.In regard to his actual supplement stack, Rogan complements his healthy and well-balanced diet with a range of vitamins. Here are the supplements which he takes every day of the week: