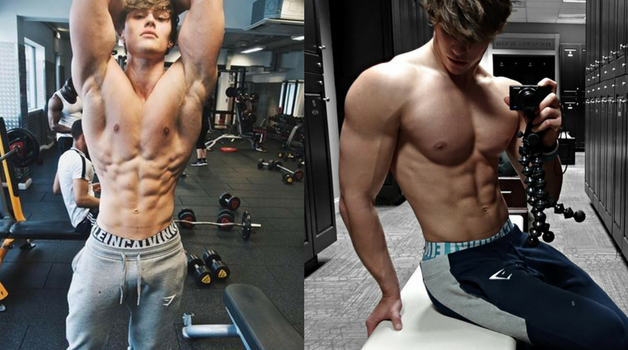 David Laid is an influencer, one that has gained a lot of fame in his short years of life. One could speculate that he must have made some kind of deal with the devil, looking that toned and being so successful.

However, there are many that became witness to his life-changing journey. One that he documented and posted online. At 19 years old he has become a big inspiration to the many people who follow him on Social Media.

His case is a fair bit special, at the young age of 14 he had been treated from something called scoliosis. This, in the end, is what pushed him to being what he is today.

Of course, it wasn’t all just fun from that point on. Getting to where he is now required a lot of work. Work with his Diet and Workout routine that was stricter than what most people had probably gone through.

To start off with, David Laid had never been much of an eater. You’ll see a lot of bodybuilders engulfing shit loads of food and drinks, all for the sake of maintaining their bodies. With David, he had struggled with eating enough food, rather than too much.

He needed the nutrients to drive his workouts. He found it necessary to count the amount of macros that he is taking day to day, just to be sure that he was getting everything he needed to stay healthy and fit.

David works out each and every day of the week, with the occasional rest day. His favorite workouts are as follows: squats, deadlifts and bench presses. It takes a lot in a man to keep that kind of body. There’s no doubt here, that David Laid has been kindling enough fire in the gym to rival hellfire.

If you want to learn more about the David Laid Diet and Workout Routine you can catch him posting on social media platforms like instagram, or you can review what services he offers through his official website.

David Laid does take supplements, although he doesn’t get too specific with the brands of supplements that he uses. Part of his genetic condition requires him to supplement the nutrients he might not be getting from his diet. As mentioned earlier, David had never been the eating type.

He wasn’t big on food and would prefer that he get just enough. However, because of the kind of body he maintains, a need to supplement the nutrients that he might be missing, becomes vital.

Here are a few noteworthy supplements that David Laid takes: