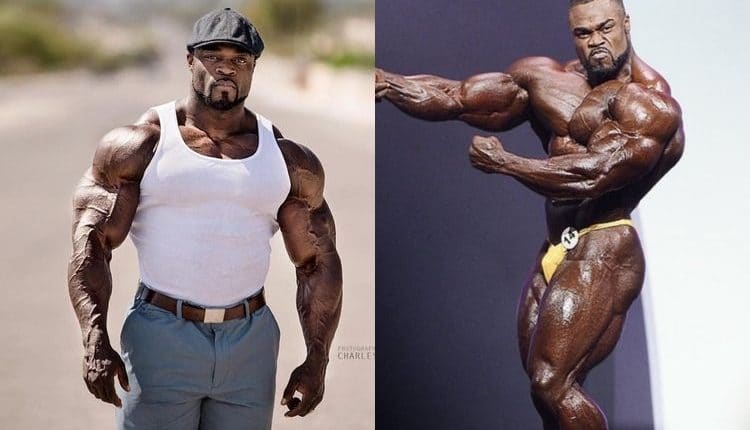 Brandon Curry is a Pro bodybuilder hailing from the USA. If you follow the bodybuilding world, then you know he’s also the 2019 Mr. Olympia.

The 260lbs powerhouse wasn’t always into fitness, though. His first contact with weights came when he was six, after receiving a pair of dumbbells for his birthday.

It took him a while to learn the ropes of training, but when he did, his passion for bodybuilding was ignited. And the rest is history. As Brandon’s muscles grew, so did his passion for the lifting sport – leading him to become the champion we know today.

Brandon eats seven to eight meals a day. He focuses on whole-food meals as opposed to processed foods. Anything that has more than a couple of ingredients on the label is typically on Brandon’s to-avoid list. He carefully chooses his macros, opting for healthy fats, complex carbs, and lean proteins.

That said, he doesn’t shy away from cheat meals. Once per week, Brandon will reward himself with a sweet treat. He burns it off quickly when he’s training with high volume and heavy squats in the gym. His diet naturally gets more strict as he approaches the cutting phase.

Brandon admits that at times, things don’t go his way. He reaches a plateau in training and nutrition despite doing his best. There are times where Brandon feels frustrated with the lack of progress, but he keeps bashing on. He’ll switch up his training routine, change his macros, or make a lifestyle change to turn the corner and become a stronger him – both mentally and physically.

Foods that Brandon Curry eats include:

Foods like oatmeal, vegetables, sweet potatoes, and rice fuel Brandon’s workouts. Bodybuilders like him typically have most of their carbs in the morning and before training, as that’s when their glycogen reserves need tanking.

Foods like nuts and fish provide Brandon with the essential fats. These include omega-3s, which support his muscle growth, mood, and general health. According to Brandon, most foods have too many inflammatory fats these days. That’s why he’s such a big fan of omega-3s which are anti-inflammatory; helping him to stay healthy and strong.

“Healthy fats of course, when it comes to managing inflammation, are important. It’s something that we lack in a typical diet these days. So supplementation if you aren’t eating a lot of fatty fish definitely offers benefits as far as heart health as well.”

Let’s not forget that fatty food such as fish are also good sources of lean protein. Which is critical for maintaining Brandon’s huge muscles.

Some athletes like to drop their carbs to a minimum when dieting for a contest. Brandon Curry isn’t one of them. He says he’s a high-carb guy and prefers to keep his fats low during contest prep. Brandon finds that his physique responds best to high amounts of good carbs. The emphasis is on ‘good carbs’ here. Stuffing himself with bread, pasta or other high-glycemic food would only lead to fat gain, which is the last thing Brandon wants in the cutting phase.

Brandon’s off-season diet doesn’t change much in terms of the food he eats. For the most part, only his macros change. He’ll eat more carbs and fats to bulk up, along with keeping a moderate-high protein intake. He aims to maintain the same quality of food from the in-season, eating unprocessed and lean meat, lots of healthful vegetables for fiber, and some fruit. Naturally, he has more leeway during this phase and can allow himself a cheat meal more often.

He also takes creatine but not all year-round. He doesn’t notice the impact of creatine on his performance when he takes it consistently throughout the year. Not to mention the water retention that comes with creatine supplementation. Which is something Brandon tries to avoid before a show.

As for cutting supplements, Brandon believes they have their place but aren’t as critical as his training or diet. He only uses them before a contest. Simply because he finds stimulant-based fat burners taxing on his adrenals. Stimulant-free fat burners have the advantage here since they’re much gentler on the body and still offer great benefits.